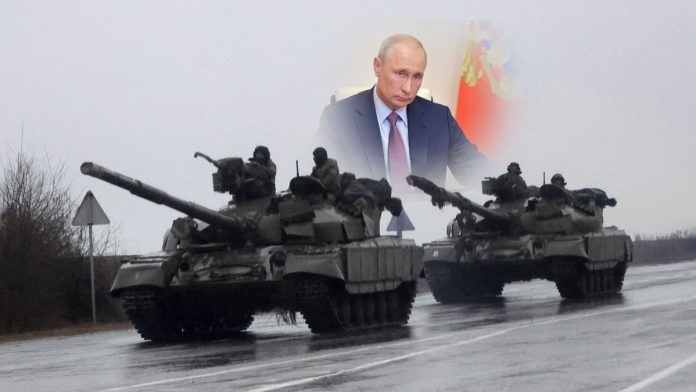 Russian President Vladimir Putin has ordered a military operation in Ukraine, leading world leaders to quickly condemn what they called the start of a Russian invasion.

In a televised address Thursday morning Moscow time, Putin continued his disinformation campaign, claiming the operation was aimed at protecting eastern Ukraine from what he called a “regime.”

Multiple outlets have reported explosions in Kyiv, the county’s capital, as well as in Kharkiv, a city in the northeast. NBC also reported Russian troops have landed in Odessa, the county’s southernmost port city, and footage showed Russian tanks entering Ukraine through Belarus, the fastest pathway for reaching Kyiv.

Ukrainian President Volodymyr Zelensky declared martial law and said in a statement that Russia “conducted strikes on our military infrastructure and our border guards.”

Russia has amassed some 190,000 troops along Ukraine’s border with numerous neighbors and as the country has increasingly eyed territory in the Donbas in eastern Ukraine.

“The #Russian invasion of #Ukraine is now underway,” Sen. Marco Rubio (R-Fla.) tweeted Wednesday night in the U.S., describing it as “a full scale & comprehensive military assault throughout #Ukraine.”

“Strikes continue on peaceful Ukrainian cities. This is a war of aggression. Ukraine will defend and win. The world can and must stop Putin. It’s time to act – just now,” he wrote on Twitter.

The order signed by Putin claims that “circumstances require us to take decisive and immediate action” and that “the People’s Republic of Donbas turned to Russia with a request for help.”

Russia has been steadily building up forces in the region for weeks, including conducting joint military operations in Belarus, even as U.S. and NATO allies have issued firm warnings to Russia to abandon escalation of tensions in the region.

President Biden on Wednesday night called it “an unprovoked and unjustified attack by Russian military forces.”

“President Putin has chosen a premeditated war that will bring a catastrophic loss of life and human suffering. Russia alone is responsible for the death and destruction this attack will bring, and the United States and its Allies and partners will respond in a united and decisive way. The world will hold Russia accountable,” Biden said.

In a speech in both Russian and Ukrainian just hours before Putin’s announcement, Zelensky sought to appeal directly to the Russian people, pleading for peace and seeking to combat claims from Putin that the country has provoked Russian aggression.

“Attacking us, you will see our faces, not our backs,” he said, warning of the tens of thousands of deaths that could come, according to a translation by the Financial Times.

“I know this speech of mine will not be shown on Russian television,” he said. “But the citizens of Russia must know the truth. And the truth is this needs to stop before it’s too late.”

“They’re telling you that this flame will liberate the people of Ukraine, but the Ukrainian people are free,” he added.

Sen. Mitt Romney (R-Utah) blamed a “tepid response” to the prior invasion and the America First policies pursued under the Trump administration.

“Putin’s Ukrainian invasion is the first time in 80 years that a great power has sought to conquer a sovereign nation. It is without provocation, without justification, and without honor,” he said in a Wednesday night statement.

“The peril of looking away from Putin’s tyranny falls not just on the people of the nations he has violated, it falls on America as well. History shows that a tyrant’s appetite for conquest is never satiated.”

A number of experts have warned any Russian invasion of Ukraine could lead to significant casualties and potential refugee crisis as U.S. intelligence predicts a mass exodus of Ukrainians of anywhere from 1 million to 5 million people.