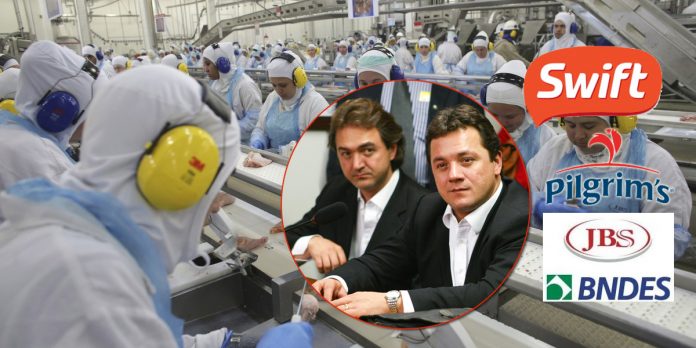 A massive Brazilian meatpacking company is raking in millions of U.S. taxpayer dollars even while two federal agencies are investigating the corruption-addled parent company of the meatpacker.

The world’s largest meat-processing giant was forced to shut down some of its US plants as more than 100 of its workers tested positive for COVID-19 last week, but the pandemic may be the least of its problems.

The Brazilian billionaire brothers — one of whom owned a Manhattan penthouse — controlling the massive meat producer JBS, which slaughters 13 million animals a day and has revenues of $50 billion a year, have been linked to high-level government corruption that has rocked the South American country.

The Batistas’ company is also being probed in America now for bribery, and has been accused of price-gouging during the COVID-19 crisis. The New York Attorney General, meanwhile, has been asked to look at the company as “an imminent threat” before it goes public on Wall Street.

Joesley Batista, 48, together with his 47-year-old brother Wesley spending six months in prison in Brazil charged with insider trading, sale area of ​​7,000 square feet apartment at the Baccarat Hotel in the middle of the city in 2018. The luxurious pad opposite the Museum of Modern Art is worth more than $ 11 million – funds intended to pay off sibling fines and legal costs, according to Brazilian press reports.

In January, the Department of Agriculture purchased $22.3 million worth of pork from JBS USA, a subsidiary of the Brazil-based company JBS SA. But the one hand doesn’t seem to know what the other is doing. While USDA is contracting with JBS, the Justice Department and the Securities Exchange Commission are investigating the parent company, J&F Investimentos, for “potential violations of the Foreign Corrupt Practices Act,” according to D.C. court documents reviewed by the Washington Examiner from September 2018. READ MORE

Last week, JBS, which sells beef and chicken under its Pilgrim’s Pride and Swift labels, said it was closing a plant in Greeley, Colorado, where four workers died from the coronavirus, including longtime packing plant employee Saul Sanchez, 78. Sanchez, a father of six, had worked for more than 30 years at the plant. A daughter, Beatriz Rangel, said Sanchez was willing to work at the plant even during the outbreak because he trusted his employer.