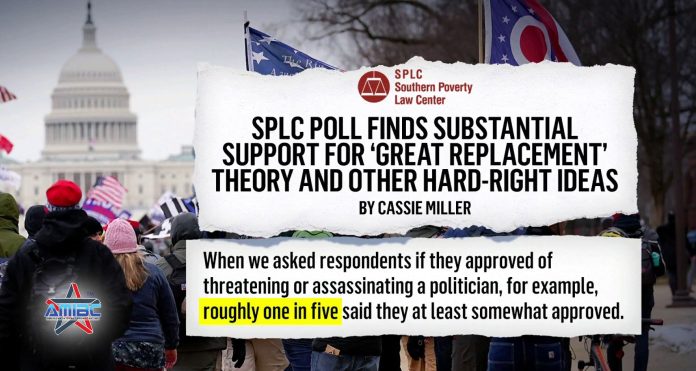 A new poll shows that two-thirds of Republicans believe in a conspiracy theory similar to one that inspired the Buffalo shooter.

Two-thirds of Republicans surveyed agreed with a core belief of the “great replacement” conspiracy theory that holds that Democrats are importing immigrants to replace “more conservative white voters,” according to a newly released survey.

Of Republicans surveyed, 68 percent said they believed that the recent shift in U.S. demographics is “not a natural change but has been motivated by progressive and liberal leaders actively trying to leverage political power by replacing more conservative white voters.” That includes 38 percent who strongly agreed with the statement, with 30 percent of Republicans saying they somewhat agreed.

The poll was conducted in April by Tulchin Research for the Southern Poverty Law Center, a civil rights organization that monitors extremism and hate groups.

The original “great replacement” conspiracy theory, and its mainstreamed Republican counterpart, have grown in popularity on the hard right in recent years. The original white supremacist version of the false theory posits that there’s a secret cabal of elites pushing to import immigrants to “replace” the native white populations of the U.S. and European countries. Many versions claim that Jews are behind this, with the goal of having immigrant populations outbreed native whites to create a population they can better control.

The GOP version swaps out Jews for Democrats, and claims that liberals and big business are colluding to import huge numbers of immigrants for cheap labor and to swamp Republicans at the polls and control elections so they never lose again.

The original theory has inspired white supremacist terrorists on multiple occasions. The Buffalo shooter who killed 10 people two weeks ago specifically cited the theory, as did murderers who killed 11 Jewish worshippers at Pittsburgh’s Tree of Life Synagogue in 2018, 23 mostly Mexican-American shoppers in El Paso, Texas in 2019, and 51 Muslims in Christchurch, New Zealand in 2019. The white supremacists’ chant of “Jews will not replace us” at the 2017 Charlottesville “Unite the Right” rally that ended in deadly violence was a specific reference to this conspiracy theory.

The poll found that half of Republicans also had negative feelings about the fact Census projections show America won’t be majority-white in 25 years. And more than half of Republicans surveyed agreed that “the changing demographics of America pose a threat to white Americans and their culture and values.”

This poll’s numbers are higher across the board compared to a similar survey conducted by the Associated Press and NORC in December, though the specific wording of the questions likely explains much of the divergence. That poll found that nearly half of Republicans believe that “there is a group of people in this country who are trying to replace native-born Americans with immigrants who agree with their political view.”