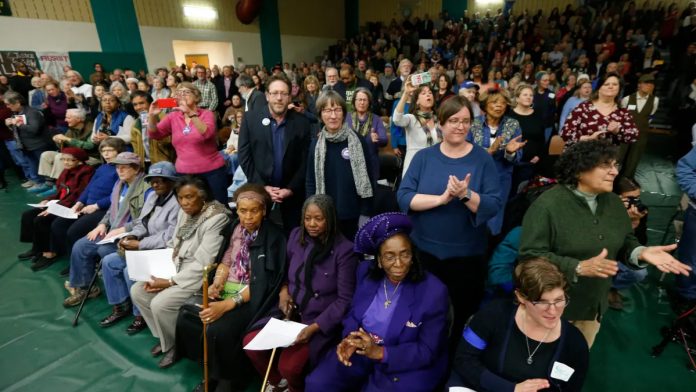 As fracked gas fields in West Virginia boomed over the past decade, energy companies jumped at the chance to build massive new pipelines to move the fuel to neighboring east coast markets. The 600-mile Atlantic Coast Pipeline would have been the crown jewel.

But Union Hill, Virginia – a community settled by formerly enslaved people after the civil war on farm land they had once tilled – stood in the way. Residents fought against a planned compressor station meant to help the gas move through the pipeline, arguing that because Union Hill is a historic Black community, the resulting air pollution would be an environmental injustice.

But Dominion Energy, one of the pipeline’s two developers, kept pushing. It pledged to invest $5.1m in community services in exchange for the imposition. The company hired a former member of the governor’s cabinet, who grew up in Union Hill, to drum up support from church leaders to landowners. They flew local leaders on a helicopter to Pennsylvania to tour a compressor station there.

Dominion’s campaign split the Union Hill community, dividing church congregations, and in some instances, families. While some residents were for the investment, others saw their resolve to fight the pipeline deepen. In response to mounting opposition, Dominion took an unexpected tack: the company hired outside help to argue that the community around the site was, in actuality, mostly white.

“No environmental justice community is disproportionately impacted,” the pipeline project told state officials January 2019, arguing that the communities around the project were “not majority minority or low income”. Dominion did not respond to multiple requests for comment for this story.

The locals who took on Dominion eventually became the linchpin of a campaign that helped to get the pipeline canceled. But the fight against the Atlantic Coast Pipeline is a familiar story now playing out around the country as gas companies expand a sprawling web of pipelines. Even when minority communities say no, the fossil fuel industry keeps saying yes.

In Minnesota, Indigenous-led environmental groups are fighting the hundreds of miles of crude oil pipeline Enbridge is constructing for its Line 3 project from Canada to Wisconsin. In North Brooklyn, New York, community groups are alleging a civil rights violation against Black and Latinx residents over National Grid’s plans to build a seven-mile natural gas pipeline through the area. In North Carolina and Virginia, tribal advocates are opposing a 70-mile extension of the Mountain Valley Pipeline that would cut through Indigenous and Black burial sites and put a large compressor station near a largely rural Black and Native American population.

In many cases, energy companies have succeeded against the wishes of residents, winning local government support by pledging opportunities of economic growth. Environmentalists are growing frustrated with the Biden administration, considering its environmental justice agenda to be full of false promises, as it has been reluctant to fight specific fossil fuel projects.

“Union Hill was unique and not unique. The patterns are quite widespread,” said Mary Finnley-Brook, who served on the Virginia governor’s advisory council on environmental justice at the time of the Union Hill battle. Historically, “infrastructure was definitively put through Black communities. We [saw] that with the interstate and with power lines and it continues to develop that way.”

Some residents believe Union Hill wouldn’t have been eyed by developers if different people lived there. “If it had been all millionaires living in that area, it would never have been considered,” said Paul Wilson, a Baptist pastor of a historic Black church near Union Hill.