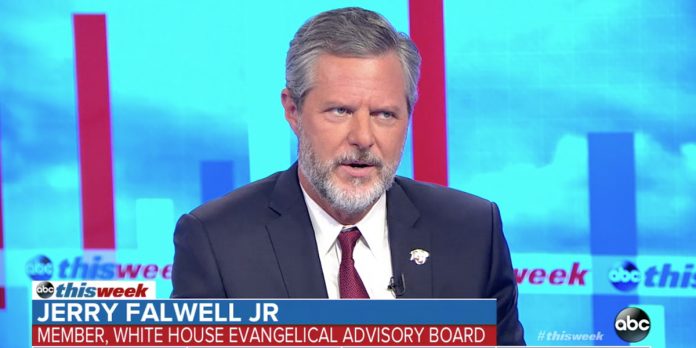 More than two dozen current and former Liberty University officials describe a culture of fear and self-dealing at the largest Christian college in the world.

At Liberty University, all anyone can talk about is Jerry Falwell Jr. Just not in public.

“When he does stupid stuff, people will mention it to others they consider confidants and not keep it totally secret,” a trusted adviser to Falwell, the school’s president and chancellor, told me. “But they won’t rat him out.”
That’s beginning to change.

Over the past year, Falwell, a prominent evangelical leader and supporter of President Donald Trump, has come under increasing scrutiny. News outlets have reported on business deals by Liberty University benefiting Falwell’s friends. Trump’s former personal attorney Michael Cohen claimed that he had helped Falwell clean up racy “personal” photographs.

Based on scores of new interviews and documents obtained for this article, concerns about Falwell’s behavior go well beyond that—and it’s causing longtime, loyal Liberty University officials to rapidly lose faith in him.

More than two dozen current and former high-ranking Liberty University officials and close associates of Falwell spoke to me or provided documents for this article, opening up—for the first time at an institution so intimately associated with the Falwell family—about what they’ve experienced and why they don’t think he’s the right man to lead Liberty University or serve as a figurehead in the Christian conservative movement.