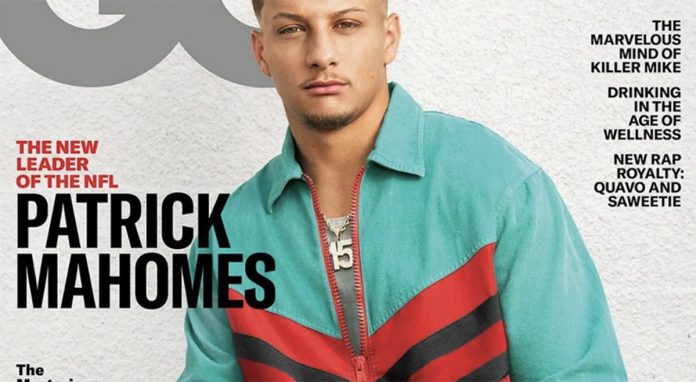 After winning his first Super Bowl, Kansas City Chiefs quarterback Patrick Mahomes was supposed to have a straightforward summer: First sign a blockbuster new contract. Then prepare to repeat. But when a pandemic gave way to a protest movement that implicated the NFL, the game’s brightest star began to find his voice—and prove that he’s as adroit off the field as he is on it.

Patrick Mahomes calls right on time. When my phone rings, the area code flashes “Tyler, Texas,” where the young Kansas City Chiefs quarterback grew up. It’s early June and a pivotal point in an already momentous off-season. Whatever he might have expected as he walked off the field in February—a first-time Super Bowl winner, coronation complete, celebration on the horizon—was upended by a generational pandemic. And now, historic protests roil the country. Two weeks have passed since the killing of George Floyd by Minneapolis police, and the 24-year-old Mahomes is still trying to make sense of the moment.

Just a few days earlier, Mahomes had joined more than a dozen other Black NFL stars—Odell Beckham Jr., Michael Thomas, and Saquon Barkley among them—in a powerful 71-second video, calling on their employer to condemn racism. It shouldn’t have been a bold assertion. But, of course, it was. While nearly every big American corporation was addressing the significant work to be done on racial justice and equality, the NFL was being asked to address a particularly egregious track record. This is a league in which 70 percent of players are Black but only three coaches, two general managers, and zero majority owners are; a league in which the response to Colin Kaepernick’s protest of police brutality was to promptly run him out of a job.

This time, though, the reaction was different. Less than a day after the players’ video, NFL commissioner Roger Goodell filmed a clip of his own, offering a point-by-point affirmation of the players’ requests. According to a report from ESPN, a key factor in his swift response was the participation of one young player in particular: Patrick Mahomes.

“I’ve seen how people, on Twitter, have tweeted and said, ‘Oh, you’re not full Black.’ But I’ve always just had the confidence and believed in who I am. And I’ve known that I’m Black. And I’m proud to be Black. And I’m proud to have a white mom too,” the athlete explained. “I’m just proud of who I am. And I’ve always had that confidence in myself.”

Mahomes had spent a lot of time listening in recent days. He’d been on the phone—with other players; with members of his family, some of whom are police officers; with Chiefs chairman and CEO Clark Hunt; and with Goodell. His conversations left him feeling optimistic, particularly his discussions with Hunt and Goodell. “They, as much as us, want to do the right thing,” he says.

Though the extent of Goodell’s willingness to change remains to be seen, Mahomes sounds committed to a dialogue. During his chat with the commissioner, Mahomes says, Goodell was curious about the young quarterback’s perspective and about what he wanted to see and do going forward. Mahomes explained that he wants to draw attention to voter-registration efforts: “Helping young adults, but especially the Black community, get registered to vote. It’s the first step.” (Days later, Mahomes would announce that he’d be lending his support to LeBron James’s More Than a Vote organization, to boost voter-registration efforts and battle voter suppression.)