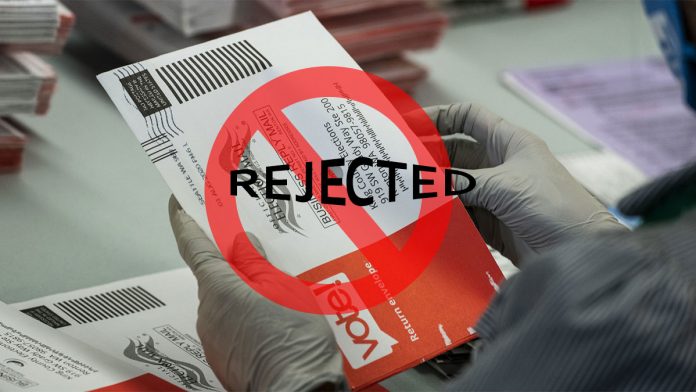 More than 500,000 mail ballots were rejected in the primaries. That could make the difference in battleground states this fall.

More than 534,000 mail ballots were rejected during primaries across 23 states this year — nearly a quarter in key battlegrounds for the fall — illustrating how missed delivery deadlines, inadvertent mistakes and uneven enforcement of the rules could disenfranchise voters and affect the outcome of the presidential election.

The rates of rejection, which in some states exceeded those of other recent elections, could make a difference in the fall if the White House contest is decided by a close margin, as it was in 2016, when Donald Trump won Michigan, Pennsylvania and Wisconsin by roughly 80,000 votes.

This year, according to a tally by The Washington Post, election officials in those three states tossed out more than 60,480 ballots just during primaries, which saw significantly lower voter turnout than what is expected in the general election. The rejection figures include ballots that arrived too late to be counted or were invalidated for another reason, including voter error.

The stakes are high as the most chaotic presidential election in memory collides with a once-­in-a-century pandemic, which has led 20 states to expand or ease access to voting by mail as a public health measure.

Election experts said that the combination of the hotly contested White House race and millions of first-time mail voters could lead to a record number of ballot rejections and trigger a searing legal war over which are valid — and who is the ultimate victor.

“If the election is close, it doesn’t matter how well it was run — it will be a mess,” said Charles Stewart III, a political science professor at MIT who studies election data. “The two campaigns will be arguing over nonconforming ballots, which is going to run up against voters’ beliefs in fair play,” he said.

President Trump has already cast doubt on whether he will accept a loss to Democratic nominee Joe Biden and has repeatedly stoked unfounded fears about voting by mail. Top campaign advisers are also mapping out a post-election strategy centered in part on challenging mail ballots that do not have postmarks, as The Post previously reported.

Citing news coverage of rejected ballots last month, Trump called the situation “a mess” and predicted that the presidential race will be the “most rigged election in history.”

For Democrats and voting rights advocates, rejected ballots are a serious concern because they raise the potential for many people to be disenfranchised — not because they reflect widespread corruption or election tampering.

Both sides agree that the race for the White House could come down to a fight over which mail ballots are counted.

Democratic lawyers and election officials in more than three dozen states are now pushing to limit the reasons a ballot can be rejected, which studies have found tend to disproportionately invalidate ballots from younger voters and voters of color. Recent mail backlogs at the U.S. Postal Service have put additional weight behind efforts to count ballots that are postmarked by Election Day but arrive late, among the most common reason for rejections. While some states have changed their rules, others have not or are stuck in litigation. READ FULL WAPO ARTICLE.