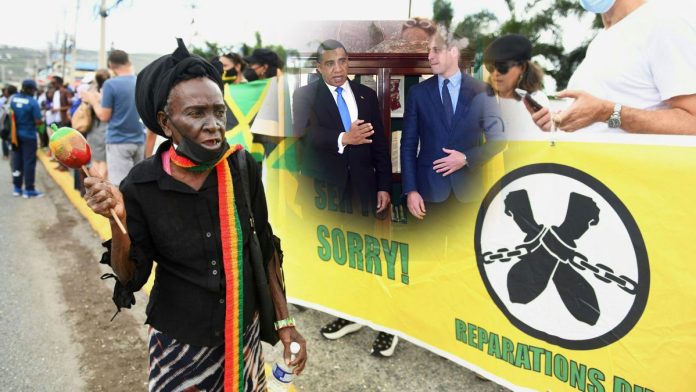 Jamaica’s republican government is said to be ‘incredibly disappointed’ that Prince William failed to apologize for Britain’s historic role in the slave trade despite his humble address last night where he called it an ‘appalling atrocity’ and a ‘stain on our history’.

The Duke of Cambridge spoke out at the end of he and Kate’s visit to Jamaica, where they were greeted like rock stars by the vast majority of the public but politicians used their presence to push forward their own campaign for a 2022 referendum to remove the Queen as head of state.

Supported by his wife, last night William chose to tackle Britain’s history of slavery head-on in a major speech, echoing his father’s words about the ‘unimaginable suffering’ it caused, in an intervention that will be viewed as a landmark moment for a British royal sent to the island by his grandmother.

But despite his condemnation of the ‘abhorrent’ trade in humans, abolished after 200 years by Britain in 1807, some Jamaicans do not believe he went far enough.

The second in line to the throne told a dinner in Kingston: ‘I strongly agree with my father, The Prince of Wales, who said in Barbados last year that the appalling atrocity of slavery forever stains our history. I want to express my profound sorrow. Slavery was abhorrent. And it should never have happened. ‘

The Jamaican government and their supporters are said to be ‘incredibly disappointed’ the Duke of Cambridge did not say ‘the word sorry’, an insider on the Queen’s fourth largest realm has claimed. Omar Ryan, Centre for Reparation Research at the University of West Indies, also said William should have gone further in the speech: ‘That is a statement of regret – but he is not admitting their role in the enslavement of African and Caribbean people’.

William’s speech came just hours after the prime minister of Jamaica Andrew Holness was accused of ambushing the future king and his wife within seconds of welcoming them to his office in Kingston.

Before the couple could sit down Mr Holness said Jamaica is ‘moving on’ and their royal visit was an opportunity to air his country’s ‘unresolved issues’ before suggesting they will be the next country to break away from the monarchy. Prince William was left nodding politely as he listened to his two minute pre-prepared statement. After signing a visitors’ book in the lobby, William and Kate were presented with an official gift of Appleton Estate Ruby rum.

An aide to Mr Holness, who is said to have helped set up the meeting, has said that they and their colleagues were shocked. The insider told ITV’s Good Morning Britain: ‘The meeting was deeply embarrassing for Prince William’, adding they ‘felt incredibly sorry for him’.

Tory MP Mark Francois told MailOnline: ‘Her Majesty the Queen has been a great friend and defender of the Commonwealth, including Jamaica, for decades. In the year of her Platinum Jubilee, you might think the Jamaican PM would show her grandson and his wife some greater respect’.

A royal aide said that the duke and duchess are ‘aware of the protest’ which had greeted their arrival on the island, although it was outnumbered by wellwishers. They added – in lockstep with Buckingham Palace when questioned on such issues – that when it comes to the issue of Jamaica becoming a republic: ‘ The Duke and Duchess say it is a matter for the people and government of Jamaica. ‘

Mr Holness campaigned on the promise of making Jamaica a republic ahead of his 2016 PM win and 2020 re-election. Last year he suggested African and Caribbean nations should unite to ‘demand reparations from colonial powers for the damage caused to our people’.

At 49, he is the country’s youngest leader to date and vowed to turn Jamaica from a constitutional monarchy into a Republic during his 2020 election campaign.

He said his government would introduce a bill to replace the Queen with ‘a non-executive president as head of state.’ A timeline for a referendum, required by law to make the change, has not yet been given. But a minister close to him hinted a vote and then separation from the British throne could be completed by the end of 2024.