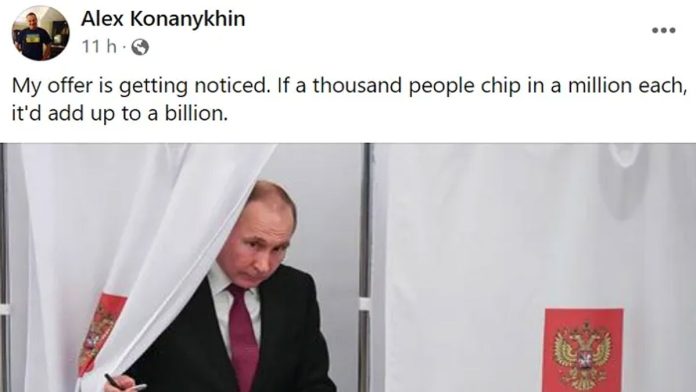 A U.S.-based Russian businessman is offering $1 million to any military officer who apprehends Russian President Vladimir Putin “dead or alive” for committing war crimes in his invasion of Ukraine.

Alex Konanykhin, an entrepreneur and former banker, posted the bounty on social media as Russia enters a full week of military action against the neighboring country. Western governments and companies have responded to the invasion by seeking to economically punish Putin and Russia’s ruling elite. The bounty offered by Konanykhin, who is now based in the U.S., places an even more direct target on the Russian leader as backlash over the invasion continues to escalate.

Konanykhin said in a Facebook post Tuesday that he promised to pay the officer or officers the money for arresting “Putin as a war criminal under Russian and international laws.”

“As an ethnic Russian and a Russia citizen, I see it as my moral duty to facilitate the denazification of Russia,” Konanykhin said in the post. Putin has sought to justify his invasion of Ukraine by saying Russian forces would “denazify” the country, an explanation that has been dismissed by Western powers.

Konanykhin, whose profile picture shows him wearing a shirt with the yellow and blue colors of the Ukrainian national flag, said in his post that he would continue his “assistance to Ukraine in its heroic efforts to withstand the onslaught of Putin’s Orda.” “Orda” means “horde” in Russian.

An earlier version of Konanykhin’s post on LinkedIn included a photo of Putin with the words “Wanted: Dead or alive. Vladimir Putin for mass murder,” according to The Jerusalem Post. The post appears to have been taken down.

Konanykhin, who made his fortune and rose to prominence after the collapse of the Soviet Union, said in his post that Putin came to power “as the result of a special operation of blowing up apartment buildings in Russia, then violated the Constitution by eliminating free elections and murdering his opponents.”

Earlier in the invasion, Ukraine President Volodymyr Zelensky said that Russian military forces marked him and his family as top targets during a televised address last week.

Konanykhin’s mention of apartment buildings appeared to be a reference to a conspiracy theory over who was behind deadly 1999 bombings blamed by Russian authorities at the time on Chechen militants.

Konanykhin later wrote on Facebook that it was wrong to say that he had promised to pay for the assassination of Putin.

“While such an outcome would be cheered by millions of people around the world, I believe that Putin must be brought to justice,” he posted.

Konanykhin had started more than 100 companies by the age of 25, following the fall of communism in Russia, according to a 1996 article in The Washington Post.

He fled to the United States in the 1990s and was granted asylum in 1999. His asylum was revoked four years later and he faced the threat of deportation to Russia before the decision was overturned.