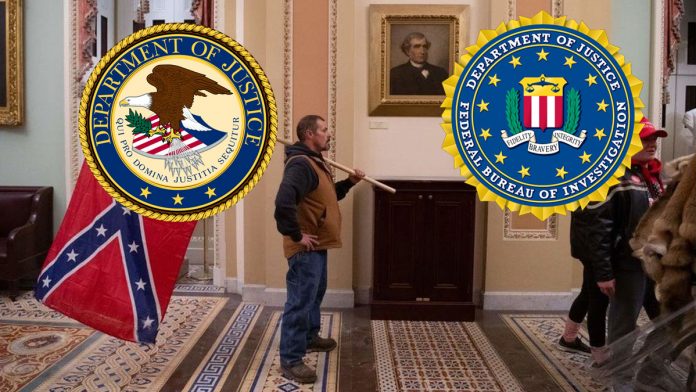 Justice Department, FBI debate not charging some of the Capitol rioters

Federal law enforcement officials are privately debating whether they should decline to charge some of the individuals who stormed the U.S. Capitol this month — a politically loaded proposition but one alert to the practical concern that hundreds of such cases could swamp the local courthouse.

The internal discussions are in their early stages, and no decisions have been reached about whether to forgo charging some of those who illegally entered the Capitol on Jan. 6, according to multiple people familiar with the discussions.

Justice Department officials have promised a relentless effort to identify and arrest those who stormed the Capitol that day, but internally there is robust back-and-forth about whether charging them all is the best course of action. That debate comes at a time when officials are keenly sensitive that the credibility of the Justice Department and the FBI are at stake in such decisions, given the apparent security and intelligence failures that preceded the riot, these people said, speaking on the condition of anonymity to discuss legal deliberations.

Federal officials estimate that roughly 800 people surged into the building, though they caution that such numbers are imprecise, and the real figure could be 100 people or more in either direction.

Among those roughly 800 people, FBI agents and prosecutors have so far seen a broad mix of behavior — from people dressed for military battle, moving in formation, to wanton vandalism, to simply going with the crowd into the building.

Due to the wide variety of behavior, some federal officials have argued internally that those people who are known only to have committed unlawful entry — and were not engaged in violent, threatening or destructive behavior — should not be charged, according to people familiar with the discussions.

Other agents and prosecutors have pushed back against that suggestion, arguing that it is important to send a forceful message that the kind of political violence and mayhem on display Jan. 6 needs to be punished to the full extent of the law, so as to discourage similar conduct in the future.

There are a host of other factors complicating the discussions, many of which center not around the politics of the riot, but the real-world work of investigators and prosecutors, these people said.

The Justice Department has already charged more than 135 individuals with committing crimes in or around the Capitol building, and many more are expected to be charged in the coming weeks and months. By mid-January, the FBI had already received more than 200,000 tips from the public about the riot, in addition to news footage and police officer testimony.

The primary objective for authorities is to determine which individuals, if any, planned, orchestrated or directed the violence. To that end, the FBI has already found worrying linkages within such extremist groups as the Proud Boys, Oath Keepers, and Three Percenters, and is looking to see if those groups coordinated with each other to storm the building, according to people familiar with the investigation.