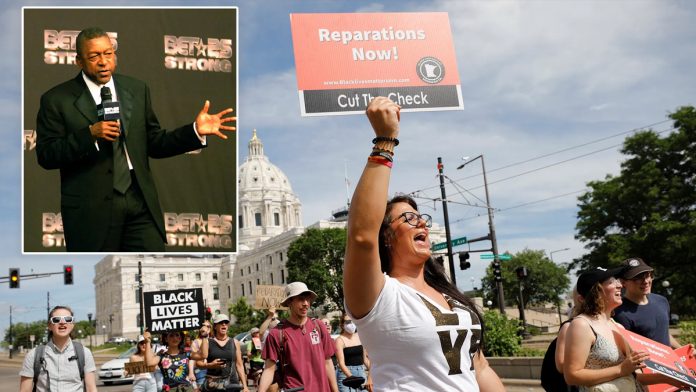 America’s first Black billionaire is calling for $14 trillion in reparations to compensate for slavery, Jim Crow, and ‘200 years of systemic racism’

Robert L. Johnson, America’s first Black billionaire and founder of Black Entertainment Television (BET), is calling on the federal government to pay out $14 trillion in reparations to Black Americans — and he wants a check too.

Johnson made the charge in an interview with Vice News published Wednesday.

“Reparations would require the entire country to … admit that the result of slavery has been 200 years of systemic racism and for that reason Black folks have been denied $13-15 trillion of wealth,” Johnson told the outlet. “And therefore we as a country now must atone by paying Black people of all stripes —the rich ones, the poor ones, and the middle—out of our pocket.”

The figure could equate to roughly $333,400 per person, based on 2019 data from the US Census Bureau that showed there are approximately 41.9 million African-Americans in the US.

The wealth gap between Black and white Americans exists for many reasons. The effects of redlining in the housing market, differences in education, homeownership, lower wages, unconscious and conscious biases, have all contributed.

Johnson, now 75, told Vice News that a $14 trillion payout would be enough money to close the wealth gap. However, he says he’s “not exactly optimistic.”

There has been legislation introduced to support reparations for Black Americans. A bill to create the “Commission to Study and Develop Reparation Proposals for African-Americans Act,” otherwise known as HR 40, would be a step towards the reparations conservation if it were to get passed. The bill was first introduced in 1989 by Congressman John Conyers.

“HR 40, when it’s passed, will not actually provide reparations for anyone, but what it will do is move us on the road to be more truthful and in direct conversation about what happened,” Rashad Robinson, president of Color of Change, a civil rights advocacy organization, told Vice News. “We’re also seeing local communities have these conversations, seeing a reparations mindset to some advocacy work to repay Black people.”