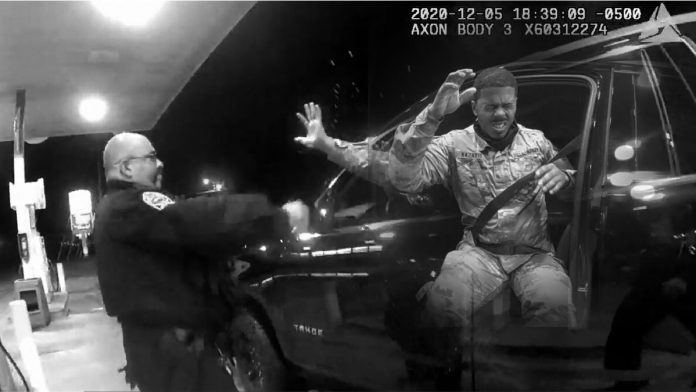 A second lieutenant in the U.S. Army has filed a lawsuit against two police officers in Virginia for a traffic stop in which they drew their guns, pointed them at him in a threatening manner, and pepper-sprayed him before knocking him to the ground and placing him in handcuffs. The reason that warranted such a high degree of force? Caron Nazario had tinted windows and didn’t have a rear license plate. Footage of the December stop from body cameras shows how Nazario, who is Black and Latino, was wearing military fatigues during the stop and had his arms up the whole time. “I’m actively serving this country, and this is how I’m treated?” Nazario says at one point.

A video shows how the officers had their guns pointing at him while Nazario sat in his parked car at a gas station. The officers repeatedly tell Nazario to get out of the car. “What’s going on?” Nazario repeatedly asks. Officer Joe Gutierrez at one point says, “What’s going on? You’re fixin’ to ride the lightning, son.” The lawsuit states that phrase was a line from the movie The Green Mile and is a reference to the electric chair. “I’m honestly afraid to get out,” Nazario says at one point. “Yeah, you should be!” Gutierrez responds. He then proceeds to pepper-spray Nazario several times. Nazario demands explanations for what is happening, saying his dog is in the back of the car choking on the pepper spray. “This is really messed up,” Nazario says.

Previously, Windsor Police Officer Daniel Crocker had radioed the station saying he was attempting to stop a vehicle but the driver was “eluding police” and he was considered a “high-risk traffic stop.” Gutierrez was driving by and heard Crocker’s call and decided to join. Nazario disputes the allegation he was attempting to drive away, saying he traveled less than a mile and was just trying to stop in a well-lit area. By the time the officers reached Nazario’s car they could see that he had a temporary license plate taped to his rear window, according to the lawsuit.

After he is pepper-sprayed, the officer manages to pull Nazario out of the SUV. Nazario is clearly disoriented, but the officers don’t stop yelling at him. “Can you please talk to me about what’s going on?” Nazario asks several times. “Why am I being treated like this?” Gutierrez proceeded to respond with “knee strikes” to the legs, which knocked him to the ground. “These cameras captured footage of behavior consistent with a disgusting nationwide trend of law enforcement officers, who, believing they can operate with complete impunity, engage in unprofessional, discourteous, racially biased, dangerous and sometimes deadly abuses of authority,” notes the lawsuit.