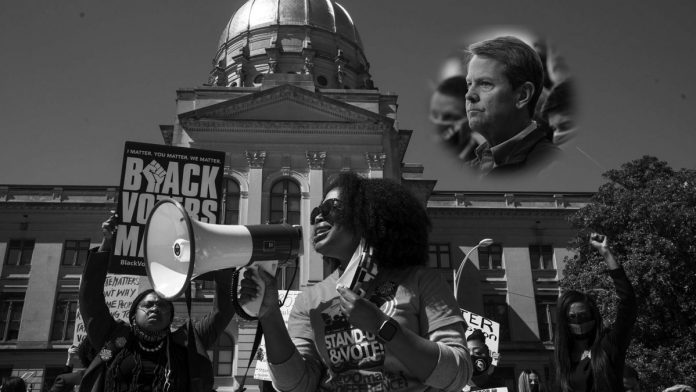 Georgia’s new voting law, signed by Gov. Brian Kemp on March 25, is part of a nationwide voter suppression effort involving hundreds of bills. No serious analyst buys the Republican claim that voter fraud is widespread: it’s virtually nonexistent. The real rationale for these bills is occasionally admitted, as when North Carolina Republicans said they outlawed Sunday voting because Sunday voters were “disproportionately black” and “disproportionately Democratic.”

Evidence is not enough to stop malevolent policies, though. If Republicans can suppress votes based on false claims, they will. Only occasionally do the courts step in, especially now that the federal bench is packed with Trump judges. What, then, can stop the assault on voting rights?

Activists in Georgia suggest an answer. In response to the new law, anti-racist organizations have been pushing corporations to demand repeal and to “put their full weight behind” voting rights legislation at the federal level. Some Black clergy leaders called for a boycott of Coca-Cola, Delta and other Georgia-based corporations that had not publicly opposed the law. Within two days of that call, many companies broke their silence and condemned it.

Many organizers are demanding they do more. The Black Voters Matter coalition began lobbying sports and professional associations to relocate events scheduled in Georgia. Activists within those associations also mobilized. The Major League Baseball (MLB) Players Alliance (composed of Black players and retirees) and the MLB Players Association pressured the league to reconsider its decision to hold the 2021 All-Star Game in Atlanta. MLB Commissioner Robert Manfred knew that some All-Star players and coaches might “stay away to protest the voting law” — not an abstract prospect given last year’s athlete strikes against racism.

The pressure campaign began to bear fruit on April 2 when Manfred announced he would relocate the game to another state. Governor Kemp fumed that Manfred had “caved” to “cancel culture” and “lies from liberal activists,” and vowed that corporate opposition would not deter his commitment to voter suppression. “For anybody that’s out there thinking that any kind of snowball effect is going to have an effect on me, it will not.”

Kemp is correct that we could see a “snowball effect”: the MLB decision could inspire more anti-racist activists to demand a boycott of Georgia, and could in turn lead more companies and professional associations to steer clear of the state. Faced with this cascade, Kemp may prove more vulnerable to pressure than his bravado suggests.

Boycotts have historically been a vital weapon against white supremacy.

The success of other state-level boycotts reveals a promising pathway for reversing the Georgia law and blocking similar laws in other states. Recent boycotts have helped restrain the flood of racist and anti-LGBT legislation. These boycotts have succeeded by imposing direct costs on corporations, which have then intervened to demand that state politicians accede to movement demands. Even unreconstructed reactionaries like Brian Kemp are not immune to those pressures.

Boycotts have historically been a vital weapon against white supremacy. They were central to the civil rights campaigns across the U.S. South in the 1950s and 1960s. In Birmingham, Alabama, in 1963, the movement succeeded because it inflicted millions of dollars in losses on downtown retailers, who then urged the police and city government to agree to desegregation. Less known is Black organizers’ proposal for a total boycott of Alabama in 1965 over the state’s refusal to crack down on white terrorism. Martin Luther King Jr. argued that “a campaign of economic withdrawal” would be “the most immediate and effective means of calling responsible people to the fore.”

King’s logic was based on a commonsense reading of power: most politicians take their marching orders from capitalists. In his words, “the political power structure listens to the economic power structure.” This same understanding guided many of the movement’s organizers. The Birmingham chapter of the Student Nonviolent Coordinating Committee argued in 1963 that if capitalists “chose to act to change things in Birmingham, things would change.” The same understanding is apparent in an April 2 statement by Cliff Albright of Black Voters Matter, who says that if corporations in Georgia had “wanted to squash this legislation, it would have been squashed.”

We need not go back to the 1960s to find effective boycotts against racism. The defeat of Arizona’s anti-immigrant legislation provides a more recent model.

In 2010 the state legislature passed Senate Bill (SB) 1070, an omnibus anti-immigrant bill whose most infamous provision legalized racial profiling by police, in fact requiring them to demand papers from all suspected immigrants. Emboldened racists introduced similar bills in 31 states. Lawsuits against SB1070 and copycat bills were able to block some provisions, but SB1070 itself survived. In 2012, the U.S. Supreme Court even upheld the law’s requirement that police racially profile.