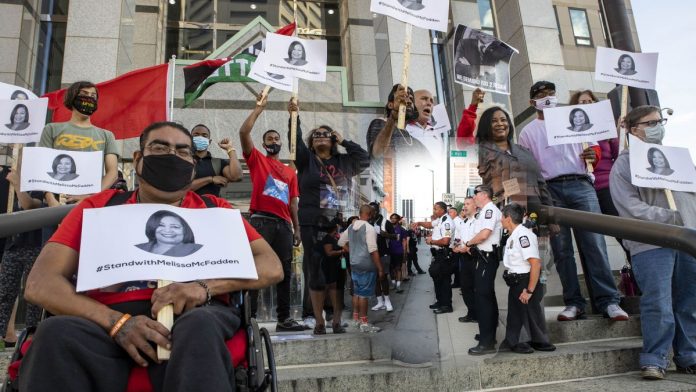 Eric Cornett had no choice but to leave the Columbus Division of Police after learning a White sergeant had called him the N-word and “monkey,” and allegedly threatened to kill him, he said.

The CDP had proposed protecting his family by placing an empty police cruiser in front of his home, but Cornett, also a master sergeant in the Air Force Reserve, was often away, he said. More troubling was that the police sergeant, Eric Moore, had access to the police audio-video room — with its GPS trackers and night vision goggles — and had been investigated for trying to purchase a lightning link, which turns a weapon fully automatic, Cornett said.

“I’m receiving death threats by a young man who has everything he needs to ‘take care’ of me,” he told CNN.

Cornett’s detective duties — hunting down murderers, rapists and other high-risk felons — were dangerous enough without colleagues threatening him. He and his wife developed a plan to protect their special-needs son and began checking their vehicles for tracking devices, he said. His wife obtained a weapons permit.

It all felt inadequate, he said — a notion that was cemented when he shared his intention to retire with an internal affairs investigator, who asked, “Are you a dead man walking?”

With just two years till full pension, the 23-year police veteran decided, “I can’t stay here.” He forfeited hundreds of thousands of dollars in retirement and benefits, sold his house below market value and took a much lower paying job in Beaufort, South Carolina. Yet even 650 miles away from Columbus, where he was born and raised, he still felt vulnerable and installed security cameras around his home, he said.

Now, Cornett is suing Ohio’s largest city in federal court, one of three discrimination suits filed by current or former Black officers, and the City Council last month approved a $475,000 settlement with a fourth officer, Karl Shaw, who says he faced retaliation for reporting what he had heard about Moore’s racism and misconduct.

The four plaintiffs, including a lieutenant who wrote a 201-page book about the treatment she received, describe a culture of discrimination that hurts minority officers and Columbus residents — an atmosphere the mayor’s office describes as “systemic racism.”

“If you treat your own Black officers this way, what are you doing to the Black citizens?” Shaw said. “I can’t imagine what some of the citizens go through.”

The officers’ claims — coming as the nation protests racial injustice and debates law enforcement training and funding — show how discrimination inside a department can hinder policemen of color sworn to perform perilous jobs while navigating bias and bigotry themselves.

The city has denied the claims outlined in the three lawsuits and conceded no wrongdoing in the Shaw settlement. The city filed motions for summary judgment to dismiss Cornett’s and ex-patrolman Kevin Morgan’s cases, as it did in Shaw’s before settling. The third suit is in its discovery phase.

In Cornett’s suit, the city’s legal team says a lieutenant put guards outside Cornett’s home after the alleged threat. City attorneys also say the officer who reported the threat had been friends with Moore before a falling-out, and if the threat were actually made, it was five months old, there was no evidence Moore acted on it and a second officer who was allegedly targeted didn’t request protection.

Slurs and the alleged death threat

In an email, Moore called the allegations against him untrue but said he wasn’t authorized to speak to the media. The city attorney, two police spokespeople, three local union leaders, the public safety director nor the police chief responded to requests for comment. State union leaders referred questions to the local union.

According to a September 2014 internal memo to CDP leadership, Detective Wes Sorrell alleged Moore, his supervisor, was upset Cornett hadn’t been disciplined for an email that Moore found offensive.

Moore referred to Sgt. Douglas Williams and Cornett by the N-word and said, “I need to take their monkey asses out back and kill them,” says the memo, which Williams authored. When Sorrell questioned why Moore was angry with Williams, Moore replied, “If that monkey had taken care of the other monkey, this would have been taken care of,” the memo says.

Cornett had served as Shaw’s partner for more than 20 years. The day before Shaw applied for a narcotics post that would report to Moore, he was approached by internal affairs.