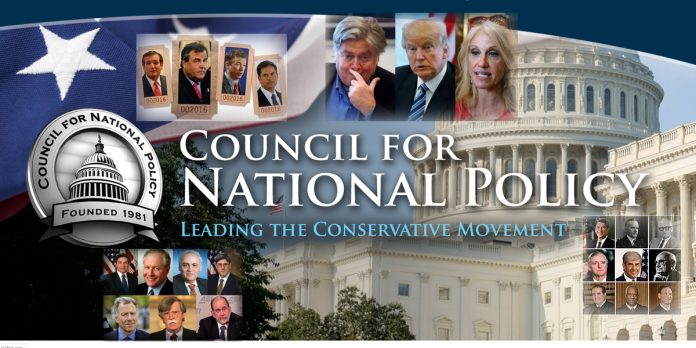 Working alongside close allies that have helped coordinate the protests, including Stephen Moore of the Heritage Foundation and FreedomWorks, Council for National Policy Action (CNP Action) has been hosting conference calls and publishing action memos around reopening states’ economies.

CNP Action is the 501(c)(4) nonprofit affiliate of the Council for National Policy (CNP), a coalition of far-right political advocacy and think tank figures that has worked largely behind the scenes since its founding in 1981. CNP’s membership includes conservative Republicans and right-wing extremists who work together to shape policy. Trump allies, including senior adviser Kellyanne Conway and former chief adviser Steve Bannon, were CNP members as of 2014. Trump’s lawyer Jay Sekulow has also been a member, according to a recently published book by Anne Nelson.

Moore has called the lockdown protesters “the modern-day Rosa Parks” for “protesting against injustice and a loss of liberties.”

The email announcing the second call, which featured ALEC CEO Lisa Nelson and State Policy Network CEO Tracie Sharp, links to information about an April 21 car protest at the Alabama Capitol Building in Montgomery, organized by the anti-LGBTQ group Eagle Forum. The forum’s founder, the late Phyllis Schlafly, was a CNP member, and several current staffers are part of the CNP-connected “Save Our Country Task Force.”

The announcement directed readers to the private Facebook page of the group ReOpen PA, which was one of three groups that organized an April 20 lockdown protest at the Pennsylvania state capitol. The other two groups’ Facebook pages have been deactivated.