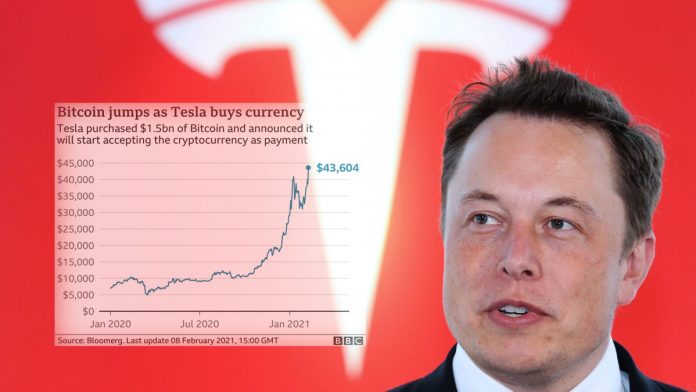 Elon Musk has helped to drive popularity of cryptocurrencies, including bitcoin and dogecoin

Tesla, the electric car company run by the world’s richest person, Elon Musk, revealed on Monday (2/8/21) that it had bought $1.5bn (£1.1bn) in bitcoin and said it might soon accept payment in the popular but controversial cryptocurrency.

News of Tesla’s investment in bitcoin sent the digital currency soaring 14% to a record high of $43,500, a 300% increase on this time last year as cryptocurrency investment has moved into the mainstream as global interest rates remain at record lows.

Tesla disclosed the bitcoin holding in a filing with the US Securities and Exchange Commission on Monday. The company said that it had “updated our investment policy to provide us with more flexibility to further diversify and maximise returns” to allow it to invest cash reserve in “alternative reserve assets including digital assets”.

It said that since the decision was approved by its audit committee it had “invested an aggregate $1.5bn in bitcoin under this policy and may acquire and hold digital assets from time to time or long term”.

The company added: “Moreover, we expect to begin accepting bitcoin as a form of payment for our products in the near future, subject to applicable laws and initially on a limited basis, which we may or may not liquidate upon receipt.”

The $1.5bn held in bitcoin represents about 8% of all the $19.4bn that Tesla holds in cash and liquid assets, according to the SEC filing.

Musk has helped to drive the popularity of cryptocurrencies, including bitcoin and dogecoin, by regularly tweeting that he is a “supporter” of the cryptocurrencies. He has also joked that bitcoin is his “safeword”.

He has previously changed his Twitter biography to “#bitcoin”.

The price of dogecoin also rose after Musk tweeted about it. Dogecoin’s price increased by 50% on 4 February, shortly after he tweeted: “Dogecoin is the people’s crypto.” Dogecoin, which uses a shiba inu dog meme as its logo, was started in 2013 as a joke, after the invention of bitcoin prompted a wave of imitator cryptocurrencies.

Dan Ives, an analyst at Wedbush Securities, said Tesla’s embrace of cryptocurrency was a “potential gamechanging move for the use of bitcoin from a transactional perspective”.

He said: “Investors and other industry watchers will be watching this closely to see if other corporations follow the lead of Tesla on this crypto path or, on the other hand, does it remain a contained few names that make this strategic jump around bitcoin.”