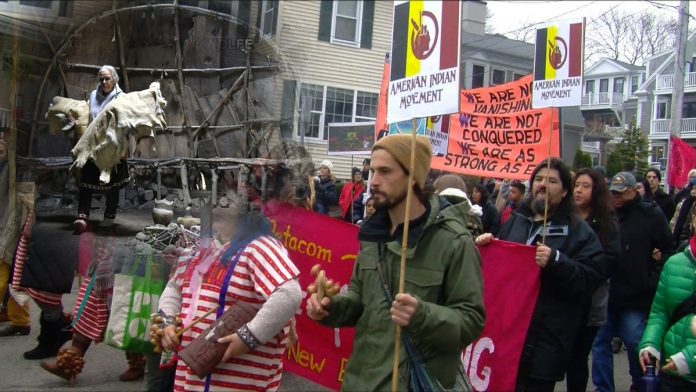 Native American tribe; Wampanoags, helped the Pilgrims survive for their first Thanksgiving. They still regret it 400 years later. Long marginalized and misrepresented in U.S. history, the Wampanoags are bracing for the 400th anniversary of the first Pilgrim Thanksgiving in 1621.

Overlooking the chilly waters of Plymouth Bay, about three dozen tourists swarmed a park ranger as he recounted the history of Plymouth Rock — the famous symbol of the arrival of the Pilgrims here four centuries ago.

Nearby, others waited to tour a replica of the Mayflower, the ship that carried the Pilgrims across the ocean.

On a hilltop above stood aquiet tribute to the American Indians who helped the starving Pilgrims survive. Few people bother to visit the statue of Ousamequin — the chief, or sachem, of the Wampanoag Nation whose people once numberedsomewhere between 30,000 to 100,000 and whose land once stretched from Southeastern Massachusetts to parts of Rhode Island.

Long marginalized and misrepresented in the American story, the Wampanoags are braced for what’s coming this month as the country marks the 400th anniversary of the first Thanksgiving between the Pilgrims and Indians.

But the actual history of what happened in 1621 bears little resemblance to what most Americans are taught in grade school, historians say. There was likely no turkey served. There were no feathered headdresses worn. And, initially, there was no effort by the Pilgrims to invite the Wampanoags to the feast they’d made possible.

Just as Native American activists have demanded the removal of Christopher Columbus statues and pushed to transform the Columbus holiday into an acknowledgment of his brutality toward Indigenous people, they have long objected to the popular portrayal of Thanksgiving.

Thanksgiving’s hidden past: Plymouth in 1621 wasn’t close to being the first celebration

For the Wampanoags and many other American Indians, the fourth Thursday in November is considered a day of mourning, not a day of celebration.

Because while the Wampanoags did help the Pilgrims survive, their support was followed by years of a slow, unfolding genocide of their people and the taking of their land.

To learn the history of the Wampanoags and what happened to them after the first Thanksgiving, a visitor has to drive 30 miles south of Plymouth to the town of Mashpee, where a modest, clapboard museum sits along a two-lane road. Outside, there’s a wetu, a traditional Wampanoag house made from cedar poles and the bark of tulip poplar trees, and a mishoon, an Indian canoe.