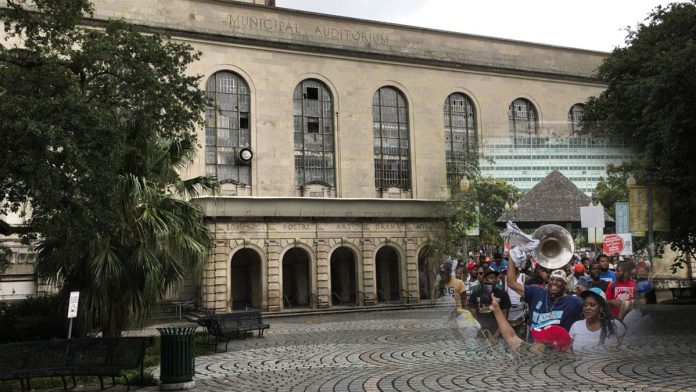 Portia Pollack, 60, lived in a cottage in New Orleans’ Seventh Ward, downriver from Louis Armstrong Park. A physical therapist by trade, she was a percussionist in the Sunday drum gatherings at Congo Square, a corner of the park facing Rampart Street.

With swinging dreadlocks and a sunny smile, Portia was a mainstay of 33 years with Bamboula 2000 and its successor, the Congo Square Preservation Society, led by veteran percussionist Luther Gray. She played djembe, congas, bongos, and harmonica, Sunday after Sunday.

Drawing locals and tourists, the drummers perform on the site where generations ago enslaved Africans resurrected rituals of the mother culture. In ring dances, the Africans paid homage to their ancestors, spinning to the rhythms of hand drums and strings on a vast field behind the rampart, or back wall of the town—today’s French Quarter.

“The dancing and singing were directed to the ancestors and gods, the tempo and revolution of the circle quickening during the course of movement,” writes Sterling Stuckey in Slave Culture. “The ring in which Africans danced and sang is the key to understanding the means by which they achieved oneness in America.”

These few remaining acres of Congo Square carry a story of survival and momentum, a spiritual essence carried in a long stream of writing and art, performance and protest. The cultural memory is mythic, a freedom quest told and retold by a procession of people pulled to the properties of freedom.

For Africans, the field began in the 1740s as a makeshift Sunday marketplace. As planters in a weak economy struggled to feed the enslaved, Africans traded their own crops, shellfish, and meat, while dances of ritual memory sprouted in rings. Over time, the number of dancers would grow as the space would shrink. In the early 1800s, the city spilled across the rampart when the first suburb, Tremé, mushroomed around the open space; free people of color become prominent homeowners in the area created as slaveholder Claude Tremé sold off land. As the dancing rings enlarged, so did crowds of onlookers—among them Indians, free Blacks, and European and American travelers, who left written accounts, like this one from 1819: “The African slaves meet on the green, by the swamp, and rock the city with their Congo dances.”

On June 7 Portia Pollack died of stab wounds outside her house about 7:30 a.m. The latest news of a surging homicide rate struck a jagged blow to Portia’s niece, friends, and musical comrades. Luther Gray went to her porch that night and sent up a percussive eulogy with other drummers, and again that weekend at a memorial held at Congo Square.

“Portia was a sister to all of the dozens of drummers in our community, and a generous and faithful friend,” Gray tells The Daily Beast. “She was the first and longest female drummer with us. She was a composer, a band leader, and martial artist.”

Meanwhile, with awful timing, Mayor LaToya Cantrell promoted a massive renovation for Municipal Auditorium—the big walled building on the grounds of Congo Square—to serve as the new City Hall. The auditorium has been dormant since the 2005 Hurricane Katrina flood. FEMA, however, has $38 million on the table for restoration.

The auditorium for generations hosted white Mardi Gras balls, stirring ire in the historic Black neighborhood of Tremé, which in the mid-1960s lost 16 square blocks to City Hall demolitions for an ill-fated “Lincoln Center of the South.” The mayor back then, Victor Hugo Schiro, was the last white segregationist. Razing all those houses created the green space—a park belatedly named for Louis Armstrong. Municipal Auditorium and the severely reduced footprint of Congo Square stand at one end of the park. The city’s assault left deep wounds in surviving areas of the neighborhood. So did cutting down a long stretch of beautiful oak trees along the North Claiborne Avenue neutral ground to accommodate an I-10 overpass with access to the business district, a feat of urban renewal that killed a bustling strip of Black-owned businesses.