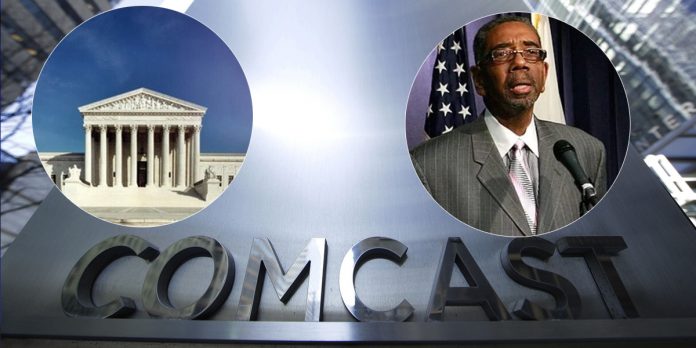 Comcast Threatened With Being “Broken Up” By Congressman

Less than a week before Comcast and Department of Justice lawyers will face off against Byron Allen in the Supreme Court in the Entertainment Studios boss’ $20 billion discrimination lawsuit against the NBCUniverisal owner, a prominent member of Congress now wants the telecommunications giant brought down to size.

“Comcast has enjoyed the largesse – as has the cable industry, in general – of the African­American and other minority communities and has reached such prominence that it now disregard these communities with a cold, callous corporate insensitivity that is stultifying, arrogant, harmful, and intensely painful,” writes Rep. Bobby Rush in a letter last night to Comcast CEO Brian Roberts that Deadline has obtained.


“Simply put, it is my belief that the Comcast Corporation needs to be broken up,” declares the long serving Illinois Democratic Congressman, who sits on the influential Energy and Commerce committee and chairs its consumer protection subcommittee.

Similar to statements by Presidential hopefuls Senator Kamala Harris (D-CA) and Senator Cory Booker (D-NJ) and other members of Congress, Rep. Rush is dismayed that Philadelphia-based Comcast in its battle with Allen has gotten in bed with the Trump Administration to force a potentially pivotal change to Civil War era passed civil rights enhancing legislation in the case that is to be heard before the nine justices on November 13.