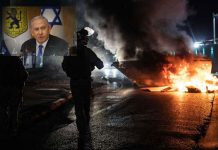 Stephen Colbert couldn’t help but show his emotion during “The Late Show” Thursday night, breaking down while talking about President Donald Trump’s speech in which he made a series of baseless claims that people were attempting to “steal” the election from him.

The remarks, which the president gave from the White House, included accusations the election was fraudulent and corrupt and came as former Vice President Joe Biden’s lead in the race grew. Trump offered no evidence of illegal activity.

Trump has come under fire for his remarks, including some news outlets pulling the livestream and Republican lawmakers coming forward to criticize him.

On “The Late Show,” Colbert, 56, quickly took aim at Trump, saying the president “tried to poison American democracy” with his comments.

“That’s why I’m not sitting down yet, I just don’t feel like it,” he explained. “That’s also why I’m dressed for a funeral, because Donald Trump tried really hard to kill something tonight.

“He said this stuff back in 2016 … so we all knew he would do this,” Colbert said, before choking up and pausing to collect himself. “What I didn’t know is that it would hurt so much. I didn’t expect this to break my heart. For him to cast a dark shadow on our most sacred right, from the briefing room in the White House — our house, not his — that is devastating.”

Now, Colbert said, something “unpredictable” needs to happen: “Republicans need to speak up. All of them, because for evil to succeed, all that is necessary is for good men to do nothing. So say something, right now, Republicans.”

He continued, “You only survived this up until now because a lot of voters didn’t want to believe everything that was obvious to so many of us: that Donald Trump is a fascist. And when it comes to democracy versus fascism, I’m sorry, there are not fine people on both sides. So you need to choose: Donald Trump or the American people?”

Mark Ruffalo tweeted, “Damn. I never thought I would see Colbert break down. Wow. I get it.”