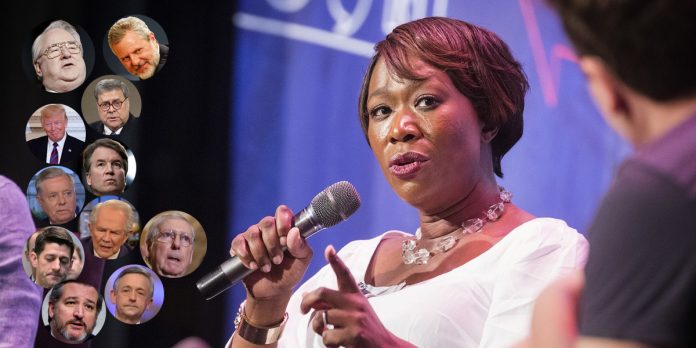 Joy Reid: ‘White Christian Men’ Would Use Apartheid to Keep Power ‘They’re increasingly open about it’

MSNBC host Joy Reid said Tuesday that white Christian men in America are “increasingly open” about their willingness to enact apartheid to ensure their control of the government.

In a clip flagged by Grabien editor Tom Elliott, Reid argued “wealthy white Christian men” are inspired by South Africa’s past oppression of its nonwhite population. At an American Federation of Teachers event titled “In Defense of American Democracy,” featuring former secretary of state Hillary Clinton, Reid spoke on a panel about how “fragile” democracy is.

“Democracy is extremely fragile, and multiracial democracy is so fragile we’re practically the only one that’s pulled it off,” she said, noting how her father grew up in the Congo, which had “a system of minority rule based on tribe.”

She said America has a similar problem because it has “a very determined minority—in this case, wealthy white men and wealthy white Christian men and Christian Americans who are of the fundamentalist variety.”

She said those men, who support President Donald Trump as an “avatar” for their movement, are happy to use South Africa’s infamous system of racial oppression to “maintain power forever.”

“If they have to pull the South Africa model to maintain power forever they will do it, and they’re not afraid of it, and they’re increasingly open about it,” she continued. “Donald Trump is merely the avatar for this, he didn’t create it. He simply benefited from it, and I think the sooner that the majority, the actual numerical majority in this country, figures that out and stops treating these elections as just foregone conclusions that you can fix it with just a simple election and that it will be free and fair, the sooner that we will wake up and actually have majority rule in this country.”