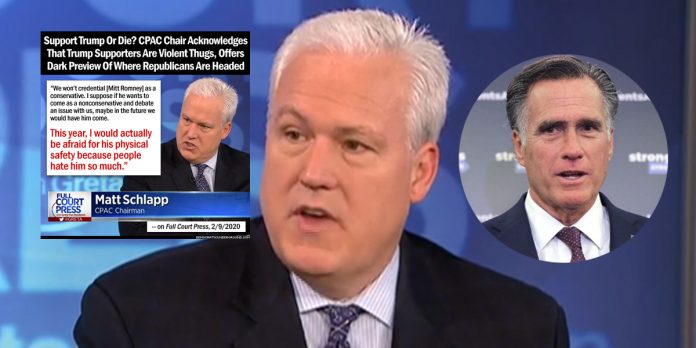 CPAC Chair: Mitt Romney’s ‘Physical Safety’ Would Be At Risk At Conference
Matt Schlapp had previously said the senator wouldn’t be invited after he voted to call witnesses in Donald Trump’s impeachment trial.

The chairman of the Conservative Political Action Conference warned in an interview Sunday that he would be “afraid” for the “physical safety” of Sen. Mitt Romney (R-Utah) if he attempts to attend this month’s annual convention in Maryland.


The ominous warning follows Chairman Matt Schlapp’s Twitter attack on the senator last month after Romney went against the party line to call for witnesses in Donald Trump’s Senate impeachment trial. Romney, the 2012 Republican nominee for president, subsequently voted last week to convict Trump of abuse of power, the sole member of the GOP to do so. The senator cited his oath to God and the dictates of his religion to do “my duty.”

Schlapp’s tweet notified Romney that he was “not invited” to CPAC — though it was unclear if the senator ever planned to attend. The tweet included an unflattering, almost frightening, image of Romney.