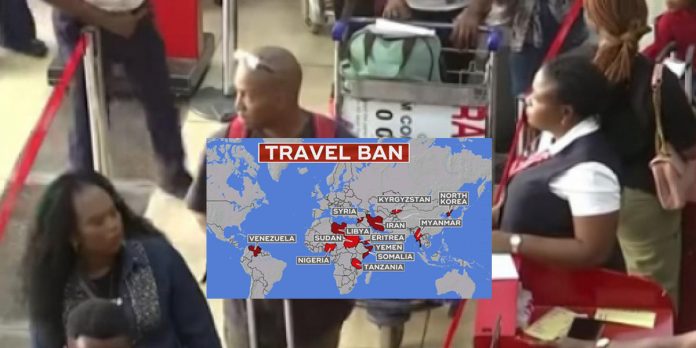 The Trump administration has expanded its contested travel ban to six additional countries — most of which are African nations. Under the new restrictions, nationals of Nigeria, Eritrea, Myanmar and Kyrgyzstan will no longer be able to obtain visas to live and work in the U.S., while Sudan and Tanzania will no longer be able to participate in the diversity visa lottery program. The ban, commonly referred to as the “Muslim ban,” already affects citizens from Iran, Libya, Syria, Yemen, Somalia, Venezuela and North Korea. The expansion is expected to affect more than 350 million people. Democrats say they will challenge the new ban and are expected to introduce the NO BAN Act in Congress soon. The latest travel ban takes effect February 22.

Critics, many of whom also denounced the initial ban, saw something far more venal at play.

“Trump’s travel bans have never been rooted in national security — they’re about discriminating against people of color,” Senator Kamala Harris, the former Democratic presidential candidate, declared on Sunday. “They are, without a doubt, rooted in anti-immigrant, white supremacist ideologies.”

And Nancy Pelosi, the house speaker, said Democratic lawmakers would push ahead with a measure to forbid religious discrimination in immigration policy.

Beyond those people who may now never make it across American borders, the new ban could also affect millions who have no plans to travel to the United States themselves but may have benefited from the billions of dollars in remittances visa holders send home each year.

The United States may also emerge a loser, studies suggest. Nigerians are among the most successful and highly educated immigrants to America. (Mr. Trump, demanding to know why immigration policies did not favor people from countries like Norway, once disparaged those from Africa and Haiti, and said Nigerians would never go back to their “huts” if they were allowed in.)