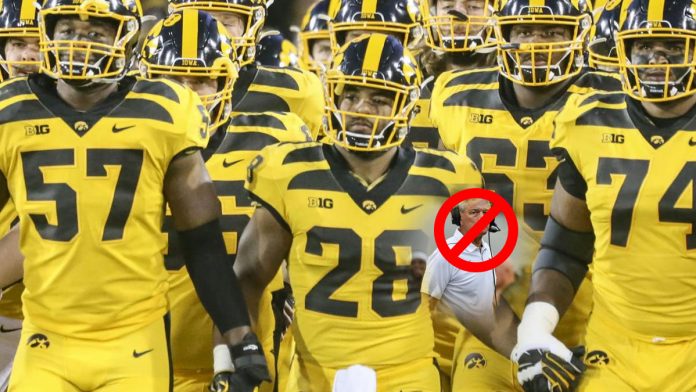 Eight Black former University of Iowa football players are seeking $20 million in compensation and for athletics director Gary Barta, head coach Kirk Ferentz and assistant coach Brian Ferentz to be fired over what they contend was intentional racial discrimination during their Hawkeye careers.

The group, which includes two of the football program’s most prolific producers in Akrum Wadley and Kevonte Martin-Manley, made the demands in a certified, 21-page letter sent to the UI. A copy of the letter, dated Oct. 5, has been obtained by the Des Moines Register.

The group is represented by Tulsa civil rights attorney Damario Solomon-Simmons and has additional demands, including attorney’s fees; the creation of a permanent Black male senior administrator position in Iowa athletics; mandatory anti-racist training for athletics staff; the establishment of a board of advisers including Black players and anti-racist professionals to oversee the football program; and tuition waivers for any Black athlete who did not graduate with a degree during Kirk Ferentz’s 22-year tenure.

According to the letter, if the demands are not met to the former athletes’ satisfaction by Monday, Oct. 19, the athletes were prepared to pursue a lawsuit “to ensure they are rightfully compensated for their emotional, mental and bodily damages and that Iowa is appropriately held accountable for its unlawful, discriminatory conduct.”

On Sunday, UI general counsel Carroll Reasoner formally replied to Solomon-Simmons to say the football program had previously taken steps to implement some of the demands but unequivocally added, “We respectfully decline your monetary and personnel demands.”

In other words: No $20 million settlement and no further firings.

To date, 21-year strength and conditioning coach Chris Doyle is the only person to lose his job over racial-bias allegations that shook the program in early June.