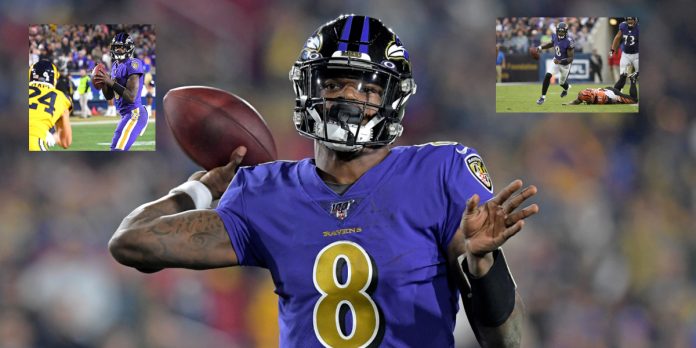 Lamar Jackson is the quarterback nobody knew the NFL desperately needed. He’s the personification of a paradigm shift.

For so long, the same old adage applied to quarterback play: “You must win from the pocket.”

Why limit a quarterback when he can do it all? Enter Jackson.

On Monday night, the Baltimore Ravens quarterback became the first player in NFL history with at least four touchdown passes and 50-plus rushing yards in consecutive games, according to Elias Sports Bureau (h/t ESPN’s Jamison Hensley). He also became the youngest quarterback in NFL history with multiple five-passing-touchdown games in a single season, per ESPN Stats & Info.

The 22-year-old signal-caller completed 15 of 20 passes for 169 and five scores while adding 95 rushing yards during the 45-6 dismantling of the Los Angeles Rams. But this story of dual-threat suppression started long ago.

Crusty coordinators begrudgingly looked at the collegiate ranks as a wide-open, free-for-all game that didn’t directly apply to the professional ranks. That approach was for lesser coaches, who had to make up for talent deficiencies with gadget plays and non-traditional play-calls.

After all, the NFL knew exactly what it took to win. Those same coaches had decades of evidence, and the transition to something different wasn’t going to come easily.