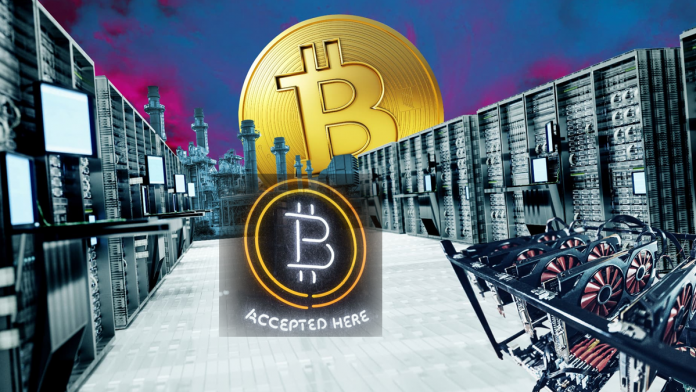 It just became a whole lot easier and much more profitable to mine for bitcoin.

The world has known for months that more than half the world’s bitcoin miners would be going dark as China cracked down on mining. Now that it’s happened, the bitcoin algorithm has adjusted accordingly to make sure miner productivity doesn’t continue to fall off a cliff.

That adjustment – which took effect early Saturday morning – also means that way more cash is going to the bitcoin miners who remain online.

“This will be a revenue party for miners,” said bitcoin mining engineer Brandon Arvanaghi.

“They suddenly own a meaningfully larger piece of the pie, meaning they earn more bitcoin every day.”

A bitcoin miner runs a program on a computer to try to solve a puzzle before anyone else does. Solving that puzzle is what completes a block, a process that both creates new bitcoin and updates the digital ledger keeping track of all bitcoin transactions.

China had long been the epicenter of bitcoin miners, with past estimates indicating that 65% to 75% of the world’s bitcoin mining happened there, but a government-led crackdown has effectively banished the country’s crypto miners.

″For the first time in the bitcoin network’s history, we have a complete shutdown of mining in a targeted geographic region that affected more than 50% of the network,” said Darin Feinstein, founder of Blockcap and Core Scientific.

More than 50% of the hashrate – the collective computing power of miners worldwide – has dropped off the network since its market peak in May.

Fewer people mining means that fewer blocks are solved each day. Typically, it takes about 10 minutes to complete a block, but Feinstein told CNBC the bitcoin network has slowed down to 14- to 19-minute block times.

This is precisely why bitcoin re-calibrates every 2016 blocks, or about every two weeks, resetting how tough it is for miners to mine. On Saturday, the bitcoin code automatically made it about 28% less difficult to mine – a historically unprecedented drop for the network – thereby restoring block times back to the optimal 10-minute window.

The bitcoin algorithm is programmed to handle an increase or decrease in mining machines, according to Mike Colyer, CEO of digital currency company Foundry. “It is a self-regulating market that does not require any outside committee to determine what to do. This is a very powerful concept,” he said.

Fewer competitors and less difficulty means that any miner with a machine plugged in is going to see a significant increase in profitability and more predictable revenue.

“All bitcoin miners share in the same economics and are mining on the same network, so miners both public and private will see the uplift in revenue,” said Kevin Zhang, former Chief Mining Officer at Greenridge Generation, the first major U.S. power plant to begin mining behind-the-meter at a large scale.

Assuming fixed power costs, Zhang estimates revenues of $29 per day for those using the latest-generation Bitmain miner, versus $22 per day prior to the change. Longer-term, although miner income can fluctuate with the price of the coin, Zhang also noted that mining revenues have dropped only 17% from the bitcoin price peak in April, whereas the coin’s price has dropped about 50%.