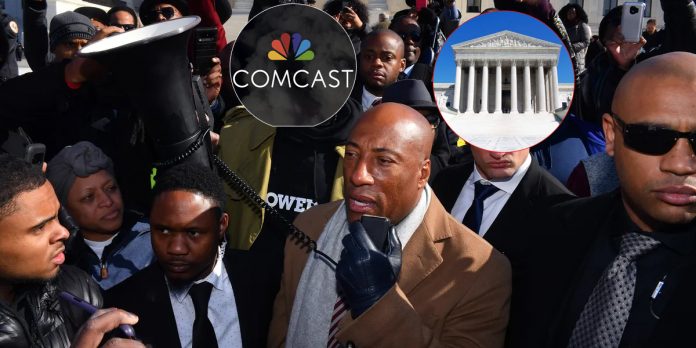 The Supreme Court handed a win to Comcast on Monday in a long-running racial discrimination suit brought by the black media mogul Byron Allen, who alleged the cable giant discriminated against him when it refused to carry channels operated by his television network, Entertainment Studios.

In a unanimous opinion authored by Justice Neil Gorsuch, the top court agreed with Comcast in upholding a high bar for bringing suits under the 1866 Civil Rights Act. The justices sent the case back to the 9th U.S. Circuit Court of Appeals, which had earlier ruled Allen need only reach an easier-to-meet discrimination standard, to consider the matter once again.

The outcome appeared likely after oral arguments in November, when the justices appeared skeptical of Allen’s position. The opinion was handed down while the court remains closed to the public the because of the coronavirus pandemic ravaging the nation.

Civil rights activists were closely watching the battle. Kristen Clarke, president of the Lawyers’ Committee for Civil Rights Under Law, has called the matter the most important civil rights case of the term. In a statement issued on Monday, Clarke said the court’s opinion “weakens our nation’s oldest civil rights statute and may shut the courthouse door on some discrimination victims.”

Entertainment Studios argued that Comcast’s reasons for refusing to carry its channels were pretexts, and that Comcast had a history of rejecting business from “100% African American-owned media companies.”

The legal question before the court was whether Allen would have to prove that Comcast would have carried his channels “but for” his race — that is to say, that they would have done so if he was not black.

Comcast argued in favor of that strict “but for” standard, while Allen said he should be allowed to sue even if race was only one factor among others, or what’s known as a “motivating factor” standard.

Allen acknowledged that the tougher standard would apply to ultimately win the suit, but argued that he should only have to meet the lower barrier during the legal battle’s early stages.

A district court dismissed Allen’s suit from the get-go because it failed to meet the but-for standard, but that decision was reversed by the 9th Circuit, allowing Allen to proceed. The Supreme Court reversed the appeals court’s ruling, ordering it to reconsider whether Allen may bring his case.