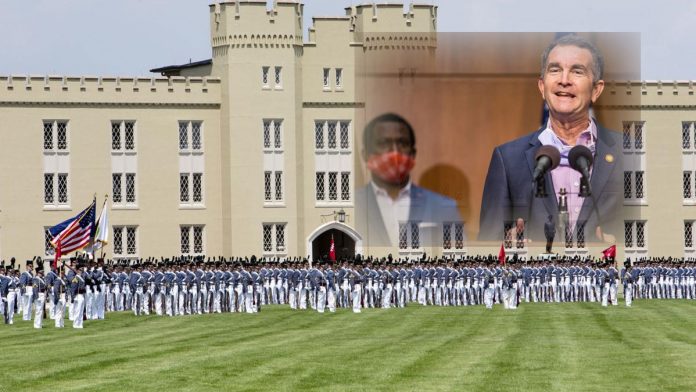 State officials have ordered an investigation into the Virginia Military Institute following a report that described black cadets and alumni facing ‘relentless racism’.

Gov. Ralph Northam co-wrote a letter Monday to the state-supported school’s Board of Visitors expressing ‘deep concerns about the clear and appalling culture of ongoing structural racism’ at VMI.

Action came after The Washington Post published a weekend story that described an ‘atmosphere of hostility and cultural insensitivity’ at the nation’s oldest state-supported military college.

It described incidents such as lynching threats and a white professor reminiscing in class about her father’s Ku Klux Klan membership at the college where just 8 percent of VMI’s 1,700 students are black.

In 2019, E Susan Kellogg is said to have told her class: ‘KKK parties were the best parties ever, they had candy, clowns, games, and meetings were held there.’

Graduate Keniya Lee lodged a complaint but Kellogg is still teaching at the college.

One black student said that in 2018 a white sophomore, who was suspended and not expelled, told him he would ‘lynch’ his body and use his ‘dead corpse as a punching bag’.

In 2017 the school’s commandant of cadets, Col. William Wanovich, was pictured at Halloween dressed up as Donald Trump’s border wall with the words ‘Keep Out’ on it.

The letter co-signed by Northam, who was part of VMI’s Class of 1981, said the state will fund an independent probe into the school, which received $19 million in state funds this past fiscal year. It will look at college culture, policies, practices and equity in disciplinary procedures, the Post reported.

VMI spokesman Col. William ‘Bill’ Wyatt told The Associated Press that the school welcomes the review and will cooperate with it.

He said the letter’s suggestion that there’s a ‘clear and appalling culture of ongoing structural racism’ is ‘just not true.’

Wyatt said a response was in the works to the officials’ letter, and he said he would provide a copy when it was available.