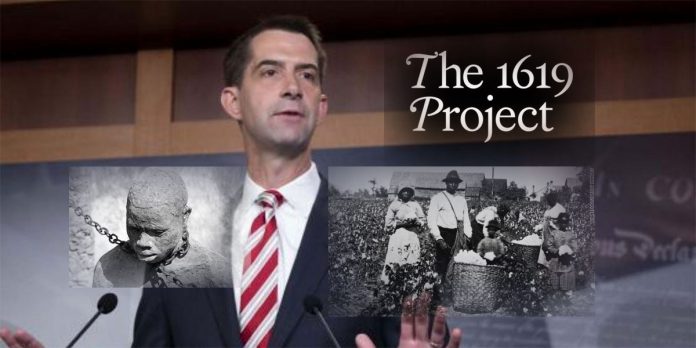 Sen. Tom Cotton (R-Ark.) faced criticism on Sunday after he claimed that the Founding Fathers viewed slavery as a “necessary evil” as part of the country’s founding while discussing his bill that would reduce federal funding for any school that includes The New York Times’s 1619 Project in its curriculum.

In an interview with the Arkansas Democrat-Gazette, the senator accused the 1619 Project, a series of pieces by writers for the Times that examines the history of slavery in the U.S. and its role in the country’s founding, of being “left-wing propaganda.”

“Even a penny is too much to go to the 1619 Project in our public schools,” Cotton told the news outlet. “The New York Times should not be teaching American history to our kids.”

Later in the interview, the Arkansas Republican addressed how he thought the legacy of slavery should be handled in America.

“We have to study the history of slavery and its role and impact on the development of our country because otherwise we can’t understand our country. As the Founding Fathers said, it was the necessary evil upon which the union was built, but the union was built in a way, as Lincoln said, to put slavery on the course to its ultimate extinction,” he said.

Those remarks were sharply criticized on Twitter by Nikole Hannah-Jones, a New York Times reporter and director of the 1619 Project.

“If chattel slavery — heritable, generational, permanent, race-based slavery where it was legal to rape, torture, and sell human beings for profit — were a ‘necessary evil’ as @TomCottonAR says, it’s hard to imagine what cannot be justified if it is a means to an end,” she tweeted.

Cotton responded in his own tweet, which was soon retweeted by President Trump, writing that Jones’s statement amounted to “more lies from the debunked 1619 Project.”

“Describing the *views of the Founders* and how they put the evil institution on a path to extinction, a point frequently made by Lincoln, is not endorsing or justifying slavery,” he responded. “No surprise that the 1619 Project can’t get facts right.”

Other journalists responded to Cotton’s interview and subsequent remarks on Twitter, including CNN’s Andrew Kaczynski, head of the network’s investigative KFile unit.