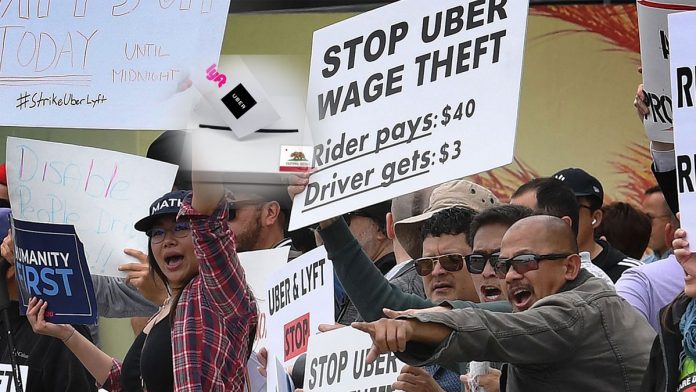 At first, Uber and Lyft driver Michael Richert was undecided about how he would vote on Proposition 22, a California ballot initiative sponsored by gig economy giants Uber, Lyft, DoorDash, Instacart and Uber-owned Postmates that comes up for a vote in November.

Then, he found out how much they were spending to get it passed: over $185 million, according to California Secretary of State records. Richert said he was “blown away” by the amount, and started looking into what’s really at stake for him and other drivers.

The amount of financing behind the ballot measure — the most expensive proposition in the state’s history according to Ballotpedia — underscores how important its passage is to the future of the businesses.
The companies have built up massive fleets of workers over the years by treating them as independent contractors, who are paid on a gig-by-gig basis. But a new law which went into effect this year in California, threw a wrench into the model.

So, gig companies are fighting back with Proposition 22, the App-Based Drivers as Contractors and Labor Policies Initiative. If it passes, ride-hail and delivery drivers would continue to be treated as independent contractors with some benefit concessions granted by the proposition. If it doesn’t pass, these workers would likely be considered employees who are entitled to a minimum wage, overtime pay, workers’ compensation, unemployment insurance and paid sick leave.

Richert, who is based in Southern California, said that, while he hasn’t driven since the onset of the pandemic for fear of contracting the coronavirus, he frequently checks the apps when there’s messaging about the importance of passing Proposition 22, or Prop 22 as it’s commonly called. When he flips on the television, he sees ads sponsored by the campaign touting the flexibility of the job, a perk which is popular with workers and the companies claim is contingent on maintaining their independent contractor status.

“This is an all-out battle royale to make sure they are ultimately victorious,” Daniel Ives, an analyst at Wedbush Securities, told CNN Business. “If it falls by the wayside, there are going to be serious business model changes to the gig economy.”

If the ballot measure fails to pass, the market for ride hail and delivery drivers could drastically change, according to Yes campaign spokesperson Geoff Vetter. It could mean their services would become more expensive for consumers and that the companies would employ just a fraction of the drivers who are on the road today, Vetter said. Those workers would have stricter schedules and wouldn’t be able to just turn on their apps and work whenever they want, according to the Yes campaign.