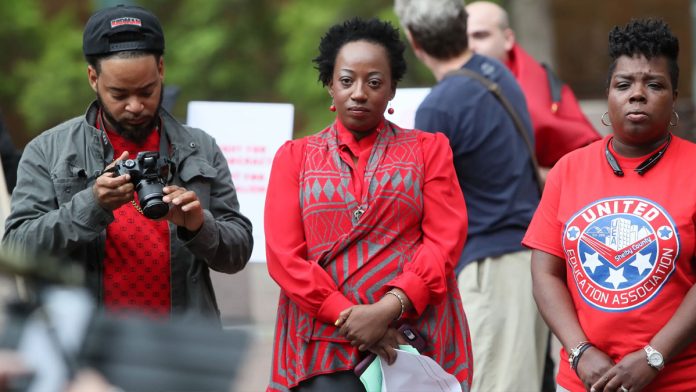 Pamela Moses, the Memphis woman who was sentenced to six years in prison for trying to register to vote, says she is grateful to be released – but believes the case against her was a “scare tactic” to discourage other people from casting a ballot.

Moses was released from prison on bond on 25 February after a judge unexpectedly granted her request for a new trial, citing evidence, obtained by the Guardian, that had not been disclosed to Moses’ defense.

In her first interview since being freed Moses recalled the moment in the courtroom when Judge W Mark Ward decided to grant her a new trial – and said she was “overwhelmed with joy”. Video shows Moses nearly in tears and screaming in excitement when Ward ruled he was granting her a new trial.

She knew that judges rarely reverse themselves and grant requests for new trials, but she had been praying Ward would see beyond her criminal record. “I was very grateful that God had allowed him to correct his own mistake, and that’s what you need in the criminal justice system.”

But Moses, a longtime activist connected to the Memphis chapter of Black Lives Matter, still faces the possibility of a retrial. Moses says she was unaware she was ineligible to vote, and state officials acknowledged they made an error in indicating to her that she was eligible. Her case has brought renewed focus to the practice, common in many US states, of depriving people convicted of certain felonies of their voting rights for widely varying lengths of time, but sometimes for life.

“It’s a scare tactic, what they did to me,” Moses told the Guardian. She thinks other people with criminal convictions will think twice before seeking to cast a ballot in elections. “It’s like, ‘if she went to jail for that, we don’t need to do that. We don’t need to follow her because we’re going to be in jail for six years too.’ I would say it sends a confusing message to people who want to vote.

“Why should people be worried if they’re going to be prosecuted for doing their civic duty?”

Moses is a well-known activist in Memphis who has filed numerous cases in local and federal courts, often representing herself. She has been outspoken against a number of local officials, including the local election commission, judges and Amy Weirich, the local district attorney who is prosecuting her case. She said she believes she’s being “persecuted” for being so outspoken.

“If you silence the loudest person that’s screaming, ‘hey Black people, go vote, don’t vote for her, remove her from office’ then you eliminate the opposition,” she said. “I believe, not only if I wasn’t Black, but if my name wasn’t Pamela Moses, this probably never would have been a case.”

Moses’ case attracted national attention because of the harshness of her sentence, which seemed at odds with the evidence in the case. Before the trial, election officials in Memphis conceded that they erroneously never removed her from the voter rolls after she pleaded guilty to felony charges in 2015.

In 2019, Moses launched a campaign for mayor of Memphis and sought clarification from court officials about whether she had completed her felony probation and could appear on the ballot. A judge told her she was still on probation, but Moses still believed she was eligible and went to a probation office and asked them to verify her eligibility and sign a certificate saying she could vote. After about an hour of investigating, the probation officer did so.

Prosecutors blamed Moses for this. In their request for an indictment, they wrote she “convinced” the officer to sign off on the document. And during her sentencing hearing, Ward, the judge overseeing her case, accused her of deceiving the probation officer into signing off on the eligibility certificate. Moses said she didn’t trick anyone and was stunned to hear such an assertion.

“I was like wow, I need to go to magic school or something. I’m the new Houdini. I’ve got that much power to trick somebody I’ve never met, never seen in my life into doing something just by walking in the place? You know, no.”

But a document obtained by the Guardian last month, after the trial concluded, showed that probation officials investigated the incident and found that the probation officer, identified as Manager Billington, had made an error on his own. Even though Moses’ file said she was still on probation, Billington thought that another person had made a mistake. The official who conducted the investigation ultimately determined that Billington was negligent and to blame for the error.

Moses went out of her way to defend Billington. “I don’t like how everybody is portraying that supervisor as a bad person. That man did his job,” she said. “I don’t think that man did anything other than what he could do based on the information that he had in front of him.”