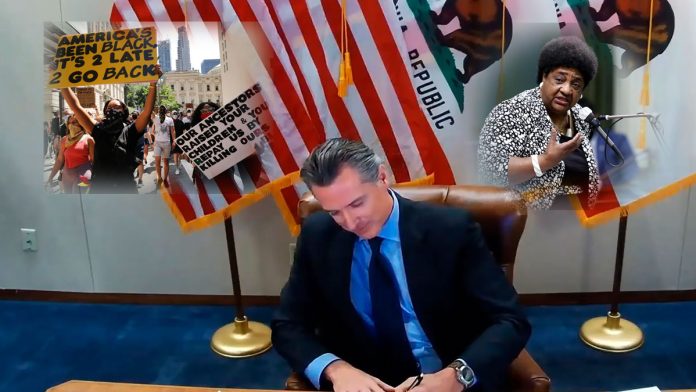 Supporters of a federal effort to study reparations for Black Americans are closely watching an ongoing debate in California over how to address the wrongs of history and dismantle racist structures.

California is the first state in the nation to seriously consider some form of reparations for Black Americans. The California Reparations Task Force is made up of academics, lawyers, civil rights leaders, lawmakers and other experts convened by Gov. Gavin Newsom and is tasked with studying the state’s role in perpetuating the legacy of slavery. The task force is expected to recommend proposals by next year to the Legislature.

Last week, task force members listened to experts give testimony on the exclusion of Black people in tech and public health, and the effects of discrimination on African Americans’ mental and physical health. It was the group’s sixth meeting since it began its work last summer.

Start the day smarter. Get all the news you need in your inbox each morning.

“We need to lead on this. We need to show the nation what reparations truly can look like,” said California State Sen. Steven Bradford, who is one of two lawmakers appointed to the task force. “It’s often said, ‘so goes California, so goes the nation.’”

The redress proposals will be expansive, including everything from direct payments, housing and business grants, to recommendations for ending policies it identifies as discriminatory, according to task force members.

Theopia Jackson, a professor of psychology at Saybrook University in Pasadena, California, testified before the commission Friday on the psychological toll of discrimination on Black Americans and encouraged the task force to do more than just consider financial redress, but to also come up with solutions to “target the systems that continue to do harm to our people from a psychological, emotional and spiritual place.”

The task force was proposed by former assemblymember and current California Secretary of State Shirley Weber in February 2020 and was signed into law by Newsom in September 2020 amid a national reckoning on racism after the death of George Floyd.

The California effort has resonated with activists who want reparations for all Black Americans, with many seeing California as a test case for national and other state and local reparations programs. They hope to see Congress seriously consider HR 40, a reparations study bill that has been introduced in Congress for 33 consecutive years without a floor vote.

Cash reparations are largely unpopular with white Americans and widely backed by Black Americans, according to a 2019 Gallup poll. Numerous studies show stubborn gaps persist between white and Black Americans when it comes to economic and educational gains, as well as health care.

Chris Lodgson, the lead organizer with the Coalition for a Just and Equitable California, hopes to see direct cash payments as part of a larger package of remedies.

“The path forward is going to have to, in addition to that, create specific types of reparations that target helping our people here in California become not just more powerful consumers, but also help us to become better producers,” Lodgson said. “So that must go hand in hand with direct cash payments and that means endowing us with business grants, endowing us with industrial grants.”

California, which joined the union as a free state in 1850 but enforced fugitive slave laws, wouldn’t be the first government to carry out a reparations program for Black residents.

In 2019, Evanston, Illinois, became the first city in the United States to approve financial reparations for Black Americans when it approved a $10 million reparations fund for its Black residents and for people whose Black ancestors lived in the city. It rolled out its first initiative earlier this month, selecting the first round of participants to receive $25,000 housing grants.

In June, 11 mayors from around the country, including the mayors of Los Angeles and Austin, Texas, formed a group pledging to bring about reparations in each of their cities.

Reparations advocacy groups organizing at the national level say these state and local initiatives will prove integral not just in pushing HR 40 over the hump, but in helping create the infrastructure for a federal reparations program.

“Local operations are going to help identify patterns and where resources are most needed in areas across the country,” said Kamm Howard, co-chair of the National Coalition of Blacks for Reparations in America, a leading group that helped HR 40 get off the ground in 1989. “The local initiatives provide the federal government with ‘shovel ready’ projects that have been tested and proven to be successful, and that need to be expanded on a federal scale.”

The federal government has issued reparations to victims of racial abuse before. In 1988, President Ronald Reagan signed the Civil Liberties Act, which issued $20,000 checks as redress to Japanese Americans who were forced into internment camps during World War II.

Kathy Masaoka, chair of the Nikkei for Redress and Civil Rights, a group based in Los Angeles that fought for redress in the 1980s, said the Japanese American community felt strengthened after winning a battle many doubted they would win. But Masaoka said she hopes reparations for African Americans will include something she feels was missing from the Civil Liberties Act: a public education campaign about the harm done.

“If a country is really serious about correcting wrongs, a country would do like what Germany did, which is to educate their whole population.”

One of the biggest questions facing the task force is who exactly would be eligible for reparations, a topic it hopes to tackle during its February meeting. Lodgson, Weber and Bradford expect the eligibility to be narrowed to residents who can trace their lineage to Black people who were enslaved.

A report of the task force’s initial findings is set to be released in June, but the committee has until summer 2023 to deliver a report with remedy proposals to California lawmakers.

Then comes the hard part.

“My biggest fear, after the work we’ve done with this task force, will be the Legislature,” Bradford said. “I’m hoping that they have the courage to do the right thing and support the legislation that clearly defines what reparations looks like in California.”

“If we can’t do it in liberal California, it surely won’t get done in any of the conservative red states in the South.”