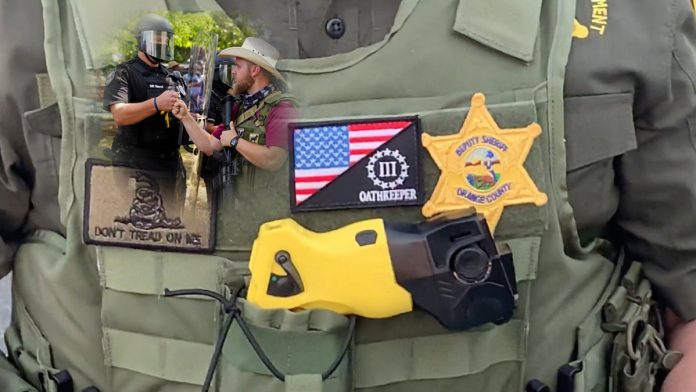 Law enforcement officers describe what they could offer the Oath Keepers:

“I have a wide variety of law enforcement experience, including undercover operations, surveillance and SWAT,” one wrote on the membership application.

“​​I am currently working as a deputy sheriff in Texas,” typed a third.

These men, who had sworn to uphold the law, were signing up to join an armed, extremist, anti-government group.

The Oath Keepers trade in conspiracy theories and wild interpretations of the U.S. Constitution. Its members have been involved in armed standoffs with the federal government. Some face charges in connection with their role in the Jan. 6 insurrection.

The statements are part of a massive trove of data hacked from the Oath Keepers website. The data, some of which the whistleblower group Distributed Denial of Secrets made available to journalists, includes a file that appears to provide names, addresses, phone numbers and email addresses of almost 40,000 members.

A search of that list revealed more than 200 people who identified themselves as active or retired law enforcement officers when signing up. USA TODAY confirmed 20 of them are still serving, from Alabama to California. Another 20 have retired since joining the Oath Keepers.

One man who filled out the form claimed he was a federal police officer and once worked for the Defense Intelligence Agency.

These men are almost certainly just a small fraction of the law enforcement officers who joined the militia over the years, since the vast majority of people listed did not volunteer information about their employment. The leaked data does not indicate whether the people on the list are now dues-paying members.

Founded after the election of Barack Obama in 2009 by Yale Law School graduate Stewart Rhodes, the Oath Keepers refuse to acknowledge the authority of the federal government. Members must abide by a declaration of conspiracy-laden orders they will refuse to enforce, including disarming the American people.