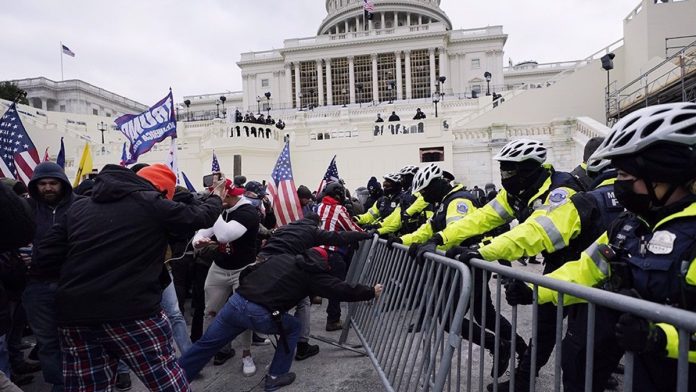 The US is “closer to civil war than any of us would like to believe”, a member of a key CIA advisory panel has said.

The analysis by Barbara F Walter, a political science professor at the University of California at San Diego who sits on the Political Instability Task Force, is contained in a book due out next year and first reported by the Washington Post.

At the same time, three retired generals wrote in the Post that they were “increasingly concerned about the aftermath of the 2024 presidential election and the potential for lethal chaos inside our military”.

Such concerns are growing around jagged political divisions deepened by former president Donald Trump’s refusal to accept defeat in the 2020 election.

Trump’s lie that his defeat by Joe Biden was caused by electoral fraud stoked the deadly attack on the US Capitol on 6 January, over which Trump was impeached and acquitted a second time, leaving him free to run for office.

The “big lie” is also fueling moves among Republicans to restrict voting by groups that lean Democratic and to make it easier to overturn elections.

Such moves remain without counter from Democrats stymied by the filibuster, the Senate rule that demands supermajorities for most legislation.

In addition, though Republican presidential nominees have won the popular vote only once since 1988, the GOP has by playing political hardball stocked the supreme court with conservatives, who outnumber liberals 6-3.

All such factors and more, including a pandemic which has stoked resistance to government, have contributed to Walter’s analysis.

Last month, she tweeted: “The CIA actually has a taskforce designed to try to predict where and when political instability and conflict is likely to break out around the world. It’s just not legally allowed to look at the US. That means we are blind to the risk factors that are rapidly emerging here.”

The book in which Walter looks at those risk factors in the US, How Civil Wars Start, will be published in January. According to the Post, she writes: “No one wants to believe that their beloved democracy is in decline, or headed toward war.

But “if you were an analyst in a foreign country looking at events in America – the same way you’d look at events in Ukraine or Ivory Coast or Venezuela – you would go down a checklist, assessing each of the conditions that make civil war likely”.

“And what you would find is that the United States, a democracy founded more than two centuries ago, has entered very dangerous territory.”

Walter, the Post said, concludes that the US has passed through stages of “pre-insurgency” and “incipient conflict” and may now be in “open conflict”, beginning with the Capitol riot.

Citing analytics used by the Center for Systemic Peace, Walter also says the US has become an “anocracy” – “somewhere between a democracy and an autocratic state”.

The US has fought a civil war, from 1861 to 1865 and against states which seceded in an attempt to maintain slavery.

Estimates of the death toll vary. The American Battlefield Trust puts it at 620,000 and says: “Taken as a percentage of today’s population, the toll would have risen as high as 6 million souls.”