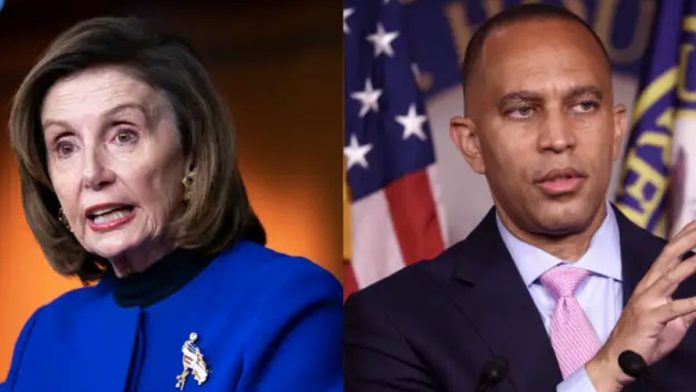 Speaker Nancy Pelosi (D-Calif.) isn’t showing her cards, but the longtime Democratic leader has vowed that this year will be her last at the top of the party, auguring a fast-approaching power vacuum that younger lawmakers have been salivating to fill for more than a decade.

A new generation of ambitious Democrats is looking to push aside the old guard of octogenarians — Pelosi, Majority Leader Steny Hoyer (D-Md.) and Majority Whip James Clyburn (D-S.C.) — but the veteran No. 2 and No. 3 leaders have been forecasting a different scenario, reaching out to their colleagues to gauge support about staying on, even if Pelosi calls it quits.

How those leadership battles play out remains to be seen. But with Pelosi having led the party for the last 19 years — and with Democrats facing long odds of keeping control of the House after the coming midterm elections — the emerging internal consensus has it that this year will be her swan song on Capitol Hill.

“My gut would tell me that this would be her last term,” said House Budget Committee Chairman John Yarmuth (D-Ky.), a member of Pelosi’s leadership team who already sees evidence of the scramble to replace her.

“I see a lot of people who would be the presumed successors donating a lot of money to their colleagues.”

“If we’re in the minority,” added another lawmaker, “I can’t imagine her wanting to do it.”

While there are sure to be others in the mix vying for leadership spots — some early speculation surrounds Rep. David Cicilline (D-R.I.), Congressional Progressive Caucus Chairwoman Pramila Jayapal (D-Wash.) and House Intelligence Committee Chairman Adam Schiff (D-Calif.) — some lawmakers are predicting “no wild cards” in the highest ranks next year.

And Jeffries, who would be the first Black Speaker in the nation’s history, appears to be the early favorite for the top spot.

“I think it’s pretty clear that our next tier of leadership is going to be Hakeem, Katherine and Pete,” said one moderate Democratic lawmaker, who like many sources spoke only anonymously to discuss a sensitive topic. “I think probably 80 percent of people here believe that.”

Some of Pelosi’s top allies are urging her to stay on, saying they don’t see anyone who could fill her shoes. Even at 81, Pelosi is a ball of energy who is in constant motion on Capitol Hill and holds the undisputed title as Democrats’ most successful fundraiser in Congress. She’s raked in more than $1 billion for her party since she joined the leadership ranks in 2002, a spokesman said, dwarfing amounts raised by others like Hoyer and Senate Majority Leader Charles Schumer (D-N.Y.).

“I support the Speaker; I think she’s done a really good job. She has been on point and she’s delivered on all the caucus priorities, so I just don’t see who would replace her at this point. I can’t envision anyone right now,” Rep. Norma Torres, a Pelosi ally and fellow California Democrat, told The Hill.