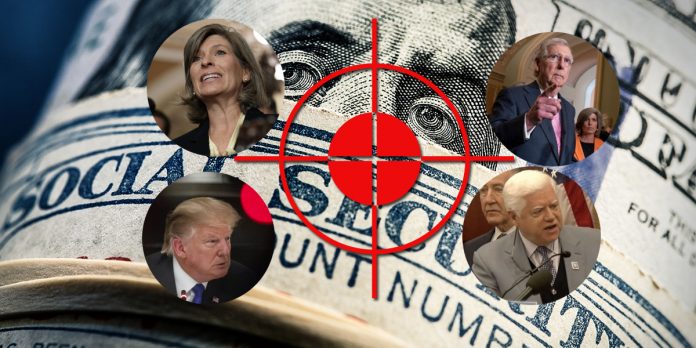 Republicans in Congress have never been good at hiding their intentions to gut Social Security.

In recent years, GOP luminaries from Senate Majority Leader Mich McConnell of Kentucky down through Sen. Marcio Rubio of Florida and former House Speaker Paul Ryan of Wisconsin have talked about the need to slash “entitlements” because, you know, the cost of programs such as Social Security and Medicare is driving the federal deficit, leaving so little room for tax-cut handouts to the wealthy.

Now Sen. Joni Ernst (R-Iowa) has added her voice to the discussion, with an added fillip. During a town hall appearance in her home state over the weekend, Ernst said members of Congress should hold discussions about Social Security “behind closed doors.”

Secrecy is essential, she said, “so we’re not being scrutinized by this group or the other, and just have an open and honest conversation about what are some of the ideas that we have for maintaining Social Security in the future.”

A video clip of Ernst’s appearance was unearthed and published by Democratic operatives. (The clip can be seen below.) It’s proper to note that Ernst doesn’t explicitly call for benefit cuts or privatizing Social Security. She talks fairly blandly about how “we as Congress will have to address the situation” and “to make sure that we’ve shored up that system” and about having “an open and honest conversation about what are some of the ideas that we have for maintaining Social Security in the future.”

But she gives away the game in other ways. To begin with, the only reason politicians ever take actions behind closed doors is that they know the results will be massively unpopular. Raising taxes on the rich to pay for Social Security benefits? That discussion can be held in the open, because the option is decisively favored in opinion polls. Cut benefits? That needs to be done in secret, because Americans overwhelmingly oppose it.